In Mitrovica’s electoral debate, seven candidates were in front of Jeta Xharra and the public while confronting one another harshly but not providing any solutions to the citizens’ problems. The audience in the hall was very noisy and affected the length of the programme, while the audience more sounded like football fans than voters who had come to listen to those who may run their municipality after November 3. 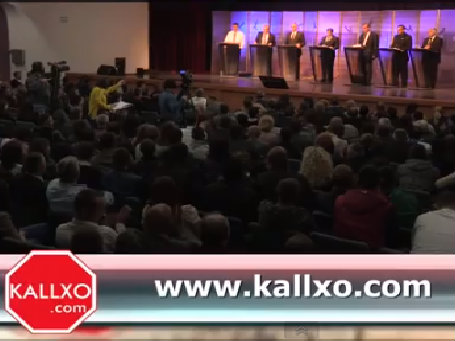 Vying to run Mitrovica, apart from Avni Kastrati, are Agrim Bahtiri, of AKR, Mehdi Jonuzi of, LDK, Faruk Mujka, of Vetevendosje and Nexhmedin Spahiu, of the Independents of Mitrovica, Shaban Dragaj, of AAK-LDD and Vesel Neziri, of the Justice Party.

AKR’s Bahtiri promised jobs and the revitalization of Trepca, Kastrati from PDK promised to make Mitrovica a city for youth and sports, LDK’s Januzi promised to solve the urbanistic chaos, independent candidate Spahiu promised a three-point programme of freedom, economic freedom and fighting against crime.

Vetevendosje’s Mujka said that he would convert Mitrovica into a free city, with rule of law and more jobs available while Dragaj of the AAK-LDD coalition said his government would be characterized by honesty, safety and professionalism, while the Justice Party’s Neziri, promised a an administration grounded by the nation, religion and the state.

The debate became even more interesting with the stories family members told about the candidates, with Kastrati’s wife saying that her husband wants to be remembered by the good deeds he has done as Mayor of Mitrovica and the mother of Agim Bahtiri saying that they live a very good life and she doesn’t want money earned indecently to be brought home. The Vetevendosje candidate’s wife praised her husband for speaking five languages, while Nexhmedin Spahiu’s mother said that her son is very smart and has taken part in many quizzes as a kid. Mehdi Jonuzi’s wife said that she doesn’t like the fact that her husband has started to drive very fast lately, while Vesel Neziri’s wife said that she leads a very happy life with her husband.