The Balkan Investigative Reporting Network Bosnia and Herzegovina has won the prestigious European Press Prize for its reporting on war crimes trials, transitional justice issues and the problems faced by victims of the 1990s conflict. 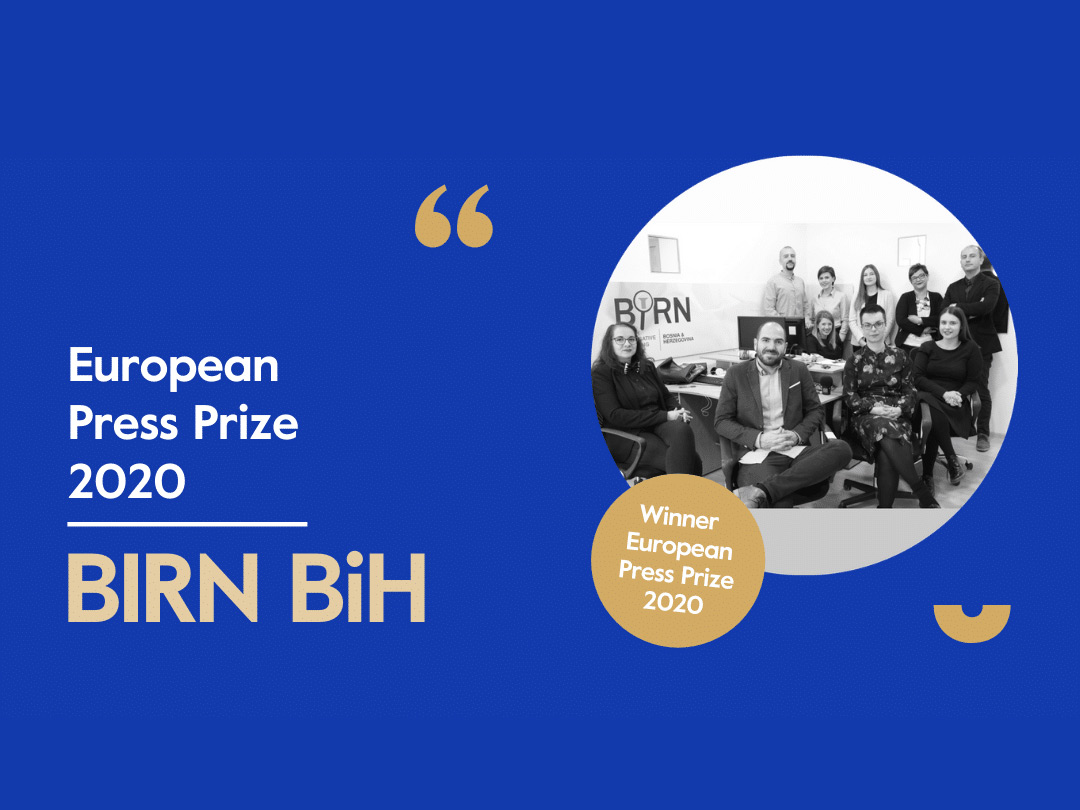 BIRN Bosnia and Herzegovina was given the European Press Prize Special Award for 2020 on Thursday for its groundbreaking work in covering transitional justice topics.

“The Balkan Investigative Reporting Network’s work ensures a unique archive of all war crime trials, as well as many personal stories of survivors, documentary films about the victims of sexual violence and families of the missing, and numerous other research and analytical stories,” the European Press Prize judges said in a statement.

The European Press Prize Special Award is given for excellence in European journalism and has previously been won by the editor of The Guardian for the publication of stories based on the Edward Snowden files, and last year by the Forbidden Stories team “for their mission to continue and publish the work of journalists facing threats, prison or murder”, the judges said.

BIRN Bosnia and Herzegovina’s executive director Denis Dzidic said the award is important for journalists in the media outlet’s newsroom, but that it also belongs to the survivors of the Bosnian war.

“This award means an indescribable amount to all of us who have spent days, weeks and months writing about war crimes and reporting daily from courtrooms to record the testimony of every victim who has come to tell their story,” Dzidic said.

“This award also belongs to the victims, because our work would be worthless if it were not for the surviving women and men who gathered the courage to share with us the most horrible things they experienced, showing courage, patience and strength that we cannot comprehend,” he added.

BIRN Bosnia and Herzegovina is part of the BIRN regional network, which uses the same methods of covering war crime trials and transitional justice processes across the whole of the former Yugoslavia.

BIRN’s regional director Marija Ristic said that covering war crime trials and transitional justice issues has been one of the core topics for network’s journalists for 15 years.

“BIRN’s first ever news report in 2005 was from a war crime trial. Years later, we continue with the same passion and dedication to providing accurate and balanced reporting and bringing uncompromising stories from a region that is still battling with revisionism and the denial of war crimes,” Ristic said.

One of the members of the European Press Prize judging panel, Alexandra Föderl-Schmid from Süddeutsche Zeitung, said that “the Balkan Investigative Reporting Network… really supports investigative journalism in Bosnia and that is really a difficult task there”.

The managing editor of BIRN Bosnia and Herzegovina, Semir Mujkic, said that receiving the European Press Prize Special Award is a great honour from the best European journalists.

“The daily commitment of our journalists to writing investigative stories and the perseverance in conveying sensitive and relevant stories has now received recognition and new encouragement,” Mujkic said.

The European Press Prize is one of most prestigious European journalistic awards and is given to journalists and media from 47 Council of Europe countries.

“Never did we have such a diverse list of entrants, nominees and winners,” Thomas van Neerbos, executive director of the European Press Prize, said of the 2020 awards.

“From the newsrooms in Norway to the brave offices of BIRN and DoR [Romanian media outlet Decât o Revistă], from taking on China’s surveillance state, via sexism in sports to a personal account of euthanasia, this is the true scope of European journalism, these are the topics that we ought to debate,” van Neerbos added.

The winner of the 2020 Investigative Reporting Award was ‘Trigger Warning’ by Annemarte Moland, Even Kjølleberg and Ruben Solvang, published by NRK from Norway.

The winner of the Distinguished Reporting Award was ‘The Uyghur Women Fighting China’s Surveillance State’ by Isobel Cockerell, published by Coda Story from Georgia.

The winner of the Opinion Award was ‘How We Stopped Being Comrades’ by Beata Balogová, published by SME in Slovakia.

The winner of the Innovation Award was ‘How DoR Organised an All-Team Pop-Up Newsroom in Transylvania’ by Decât o Revistă from Romania.