After a legal challenge by BIRN, an appeals court ordered the declassification of reports and statistics from Albania’s much-feared Communist-era secret service, the Sigurimi, which the country’s present-day intelligence agency wanted to keep restricted. 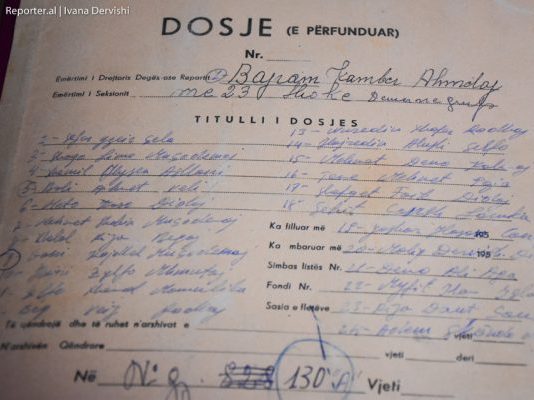 The landmark ruling by the Administrative Court of Appeals in Tirana on Wednesday paved the way for the declassification and publication of written reports and statistical data produced by Albania’s Sigurimi security service.

After almost three years of legal efforts by BIRN Albania, the court dismissed arguments from the country’s current secret service that such information should be kept secret in perpetuity.

The ruling, which cannot be appealed, upheld a first-instance court decision from 2016.

BIRN first made a legal request for the declassification of Communist-era files back in March 2016, demanding yearly reports by the Sigurimi for the period from 1980 to 1989, as well as statistical information on the number of Albanians under active surveillance by the Sigurimi during that period.

The current State Information Service, SHISH, which has controlled a large part of the Sigurimi archive since the fall of Communism, first refused the request, claiming it didn’t have the authority to handle it.

Albania’s Freedom of Information Commissioner ordered SHISH to open the files and to reevaluate their status as secret, based on a 2014 law on freedom of information.

However, SHISH then insisted in September 2016 that the information sought by BIRN should remain a state secret.

BIRN challenged the decision in an administrative court, and won in the first instance in November 2016.

However, the Administrative Court of Appeals has a backlog of some 20,000 cases and the appeal decision only came almost three years after BIRN’s first freedom of information request.

During the hearing, SHISH emphasised that in its opinion, the files and statistics should remain “secrets in perpetuity”, and said that it has “an exclusive right” to decide whether to declassify them or not.

A number of other state institutions in Albania also keep classified information that was labelled as secret during the Communist period.

It is hoped that Wednesday’s court ruling will provide a guidance them on how to handle and publish the information.

For example, an Albanian parliamentary has access to the Sigurimi files, but only provides information from them to people prosecuted under Communism.

Theodoros Alexandritis, a human rights lawyer, told BIRN that the appeals court’s decision was “a brave step” in the right direction.

“The reluctance of the secret service to disclose any info and hold it under wraps forever shows that a culture of secrecy is still prevalent in that institution and that successive governments have not done anything to counter it,” Alexandritis said.

“In terms of the importance, the decision is clearly a brave step by the Albanian courts to bring their approach on this sensitive issue in line with international law standards and the European Court of Human Rights’ jurisprudence,” he added.