There is a problem with official financing of media content on the local level because of lack of transparency and allegedly favouritism displayed tender commission members who evaluate the projects, a BIRN Serbia debate heard on December 13. 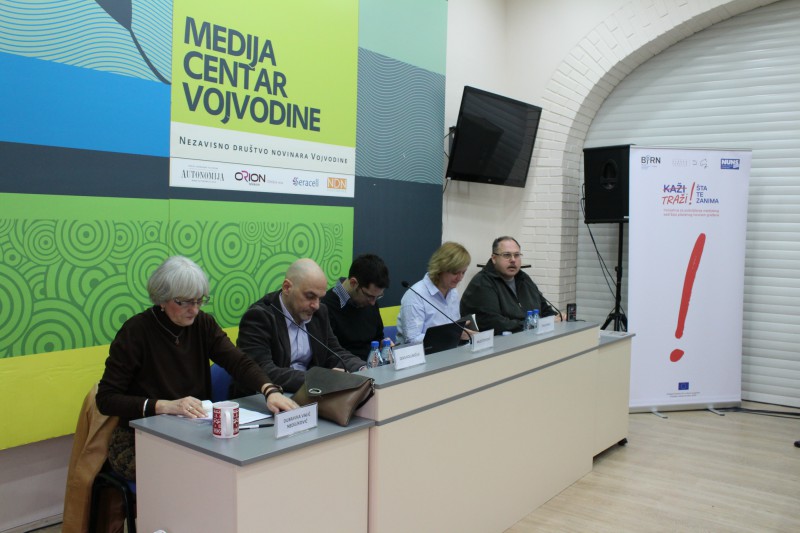 The debate in Novi Sad was moderated by Nedim Sejdinovic from the Independent Journalists’ Association of Vojvodina (IJAV), and the panel included Tanja Maksic from BIRN Serbia, journalist Denis Kolundzija, legal consultant Milos Stojkovic, and Dubravka Valic Nedeljkovic from the Novi Sad School of Journalism (NSSJ).

It was organised as part of the Public Money for the Public Interest project that BIRN Serbia is implementing with the Independent Journalists’ Association of Serbia (IJAS) and the Slavko Curuvija Foundation (SCF).

The aim of the debate was to present information gathered by BIRN, IJAV, SCF, IJAS and NNSJ about the deficiencies of the project-based co-funding system, as well as to propose possible improvements to address these problems.

The panelists said that there was what they described as political control of state funding allocations to local media, and that certain media were being favoured above others.

But there is rarely money for sensitive and marginalised groups, they agreed.

“A large amount of public money is allocated to the media through non-transparent individual income processes, which according to the law is provided for in emergency cases, but reality shows that rarely are these projects urgent interventions,” Valic Nedeljkovic said.

The idea of project-based co-funding is good, and should not be discarded despite its problems and misuses, the panelists said.

“The alternative is that state absolutely stops having a financial impact on the media sphere, which is not possible, or to going a step back and letting local governments distribute money without any public participation,” Sejdinovic said.