On the eve of International Anti-Corruption Day, BIRN held a panel discussion in the Serbian capital as part of a conference organised jointly with the CEPRIS on the role of the media and prosecution in fighting organized crime and corruption in this Balkan country. 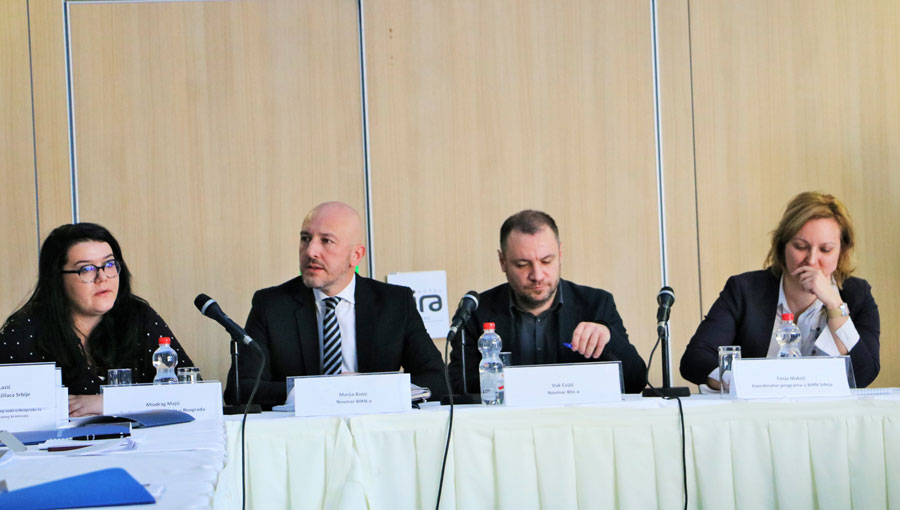 More than 60 representatives of the judicary, NGOs and media in Serbia gathered in Belgrade ahead of International Anti-Corruption Day for a conference jointly organised by BIRN on the role of the prosecution and media reporting in the fight against organized crime and corruption.

The conference, which took place on December 8, was co-organised by the Center for Judicial Research (CEPRIS), the Center for Democratic Transition from Montenegro and the Croatian Legal Center, with support from the European Fund for the Balkans (EFB) and the German Embassy in Belgrade.

During the event, debates were held on the election and position of prosecutors and deputies in charge of combatting organized crime and corruption in Serbia and the region, as well as access to information and media reporting on investigative and judicials proceedings in this sector and problems facing the Public Prosecutor’s Office.

For BIRN’s panel discussion on the day, representatives of the NGO presented the main findings of its Serbian country report on media coverage on organized crime and corruption.

The report was produced as part of BIRN’s project titled “Exercising the Freedom of Expression and Openness of State Institutions in Bosnia and Herzegovina, Kosovo and Serbia,” an endeavor supported by the German Foreign Office Stability Pact funds.

This regional study on how media report on organized crime and corruption investigations and court processes in Bosnia and Herzegovina, Kosovo and Serbia began in March 2017, with the final outcomes to be presented at a regional conference in Bosnia’s capital, Sarajevo, in January 2018.