The Media Policy Forum was organised in Chisinau by Freedom House, the Black Sea Trust for Regional Cooperation and Internews, and co-sponsored by USAID, the Friedrich Naumann Foundation and BIRN. 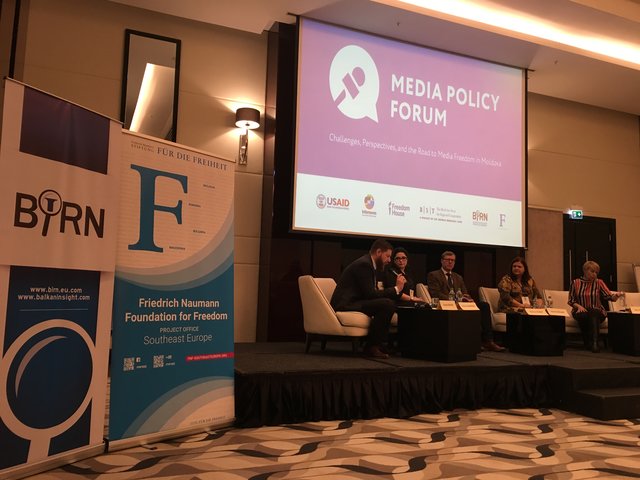 “In the last few years in Moldova, we cannot talk about progress, but more about regression,”  Nadine Gogu, executive director of the Independent Journalism Centre in Chisinau, told the Media Policy Forum in the Moldovan capital on Tuesday.

The biggest problems identified by the speakers at the forum related to the increasing politicisation of the country’s media and the alleged concentration of ownership in the hands of proxies for the ruling party, which was described as a threat to the country’s democracy.

The president of the Moldovan parliament, Andrian Candu, told the forum however that “it is important that the media should be allowed to raise its economic capacity”.

Candu argued that the media should have more access to public information and that the debates at the forum should help politicians to improve mass media legislation in Moldova.

But Moldovan media NGOs complained about the unwillingness of the authorities to offer more rights to journalists.

Freedom House described Moldova as a country with a ‘partly free’ press in its 2017 Freedom of the Press index.

Participants at a panel moderated by Tim Judah, a special correspondent for The Economist, stressed the need to increase the level of media literacy in the country as a tool to combat propaganda and so-called ‘fake news’.

The director of Romanian Centre for Independent Journalism, Ioana Avadanei, described a successful media literacy programme that was implemented in some schools in Romania with young pupils.

“It is not so much fake news that causes trouble, it is disinformation that comes in many shapes and form and it’s not only about banning content from social media, it is about how to educate people today,” Avadanei said.

BIRN’s Macedonia Country director Ana Petruseva noted how investigative journalism had played a very significant role in the fight against the concentration of media power and the disinformation spread by government-controlled media in Macedonia over the past few years.

“We had a situation when on three to four private TV stations, we could see the same exact report… the only different thing was the voiceover,” Petruseva recalled.

The Media Policy Forum was organised in Chisinau by Freedom House, the Black Sea Trust for Regional Cooperation and Internews, and co-sponsored by USAID, the Friedrich Naumann Foundation and BIRN.