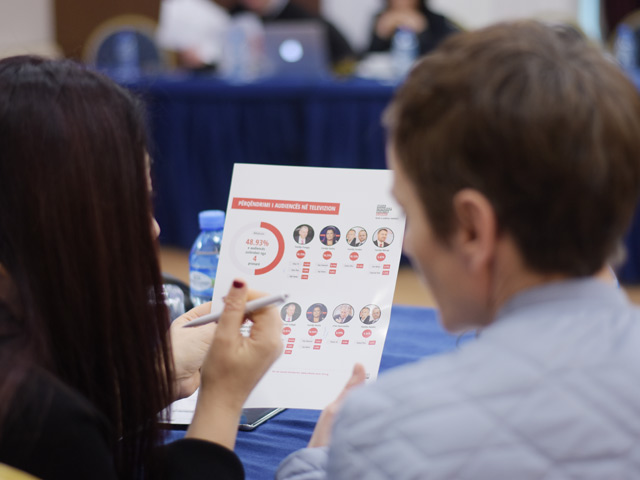 Audience and market concentration distorts the Albanian media market. The resulting lack of plurality can be detected in television and radio but also with the printed press. This is one of the results of the three-months-long investigative research that the Balkan Investigative Reporting Network in Albania (BIRN Albania) and Reporters Without Borders (RSF) have jointly carried out. The results of the “Media Ownership Monitor Albania” are presented in Tirana today. They shed light on the Albanian media market by disclosing who owns and ultimately controls mass media.

The results of the project are accessible in Albanian and English on albania.mom-rsf.org. The site offers comprehensive information about the media landscape in the country, including a database of major media outlets, companies and their owners, as well as their economic and political interests, to the general public.

Kristina Voko, Executive Director of BIRN Albania states that finally “the myth that, despite its shortcomings, the Albanian media represents a plurality of views has been shattered. A handful of families reach more than half of audience share and 90% of the revenues in our media market.”

“After decades of transition and numerous attempts from civil society activists inside Albania, as well as substantial contributions from the international community, the media landscape seems to slide further away from a path towards independence, plurality and sustainability”, added Olaf Steenfadt, RSF’s global Project Director of the Media Ownership Monitor. “We call on political elites here to understand the value of a truly healthy media sector and act accordingly, also with a view on the country’s attempts to access the European Union. Our project could serve as a respective monitoring tool.”

The presentation in Tirana today comes less than a week after the Council of Europe’s Committee of Ministers had adopted guidelines and recommendations to its 47 Member States, including Albania, on media pluralism and ownership. Urška Umek, Administrator at the Information Society Department of the Council of Europe, quoted the call on national governments to promote transparency of media ownership and added: “We encourage States to develop a regulatory framework where needed.”

Supported by a vast dataset, the Media Ownership Monitor proves exceptionally high concentration levels of the Albanian media market. For example, the top four owners in the Television segment reach half of the total audience (between 48.93% to 58,60% – based on reports of the two existing media research agencies, whose data conflict). Three families hold the five digital broadcasting licenses, out of which one alone has received three. Thus, the media regulatory authority has practically endorsed a monopoly. In Radio, the audience concentration is even higher, with four owners controlling almost two thirds (63.69%) of the audience. A medium level of concentration can be observed only in printed press, where the top four owners have a combined readership of 43.29%.

MOM also measured ownership across media sectors, TV, print, radio and online which revealed that top eight owners reach an audience of 72,1% to 80.1%.

All-in all, these figures illustrate a worryingly high risk to media pluralism in Albania. 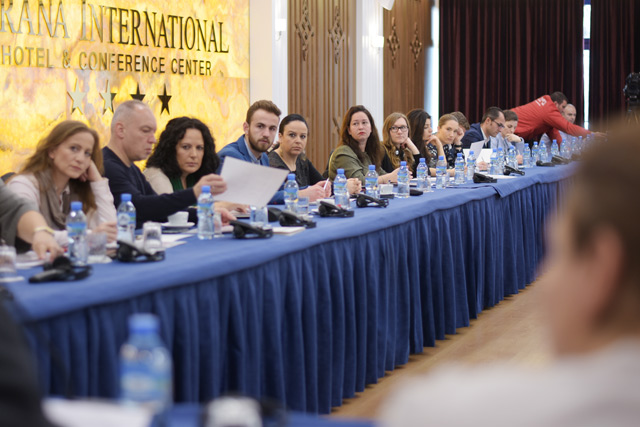 The Albanian media market is small and oversaturated, resulting in harsh economic pressure. There is no official list of print media in the country but reports have put the number at more than 200 titles. MOM investigated 12 daily national newspapers and identified a single owner with a market share of 54%. The top four newspaper publishers control 86.5% of the print market combined.

Despite the many outlets, suggesting a quantitative variety of offer, financial records show that the lion share of revenues, defining market share, is concentrated in a handful of powerful family-owned media groups.

Concentration within the commercial free-to-air TV market for the fourth biggest owners stands at 89.6% – where the two biggest alone control more than two thirds of the market (71.7% of the market share) – and jumps to even 94% if the digital network providers and the public broadcaster are included.

Although the audio-visual market is regulated by law, most media experts perceive its regulatory body, the Audio-visual Media Authority, as being under the direct or indirect influence of political and corporate actors.

Some specific regulation exists in the audio-visual media law, that limits the amount of shares and voting rights in any additional TV company, as well as the amount of advertising, but these restrictions seem opaque and no clear definition of media monopolization exists in the law, let alone it being enforced. The MOM research provides a number of cases, where, by means of ownership across families and diverse corporate structures, the original intent of the law is easily circumvented.

One key article of the law, 62/3, which limited the stakes a person or entity could acquire in a national TV station to 40%, was nullified by the Constitutional Court in May 2016.

According to the MOM’s research methodology, political control over media outlets in Albania was rated as high. The audience reach of the politically affiliated media owners ranges from 65,18% (Abacus data) to 75,86% (Telemetrix data).

Due to the pressure coming from media owners with political and economic interests, many Albanian journalists resort to self-censorship. Apart from the intricate web that is created around media owners affiliated interests, the media climate in Albania is under pressure also from a series of other factors, including the big corporate advertisers and government institutions. However, none of these outside factors play as big an influence on pushing journalists toward self-censorship as the economic and political interests of owners. In a survey, roughly 80% of journalists in Albania considered their job security as negative, clearly linking their working conditions to the wide-spread phenomenon of self-censorship as a means of protection.

As the MOM website illustrates in detail, the Albanian media market is controlled by a small number of powerful owners with strong political ties. At the same time, the few independent outlets and journalists often face intimidation and verbal abuse from politicians. During an impromptu press conference in October 2017, when faced with questions over the alleged ties of his Minister of Interior to a drug trafficking gang, Prime Minister Edi Rama lashed out at journalists, calling them “ignorant”, “poison”, “garbage bin”, “scandalmongers”, “charlatans”, and “public enemies”. Rama’s rhetoric often features the denigration of the media. Over the last few years, he has increasingly preferred communication through social media to avoid scrutiny from journalists. Some commentators have opined that a ‘strategy of abuse’ stands behind the colorful language used by Albanian politicians against the media, aiming to derail public attention from scandals by providing a readymade TV spectacle. Others see it as an attempt to delegitimize the ever shrinking pool of independent and critical journalists and outlets, not being controlled by oligarchs, politicians and their cronies.

Initiated by the German section of the international human rights NGO Reporters Without Borders (RSF), the Media Ownership Monitor project is a global research and advocacy effort to promote transparency and media pluralism at an international level. In Albania, it was conducted together with the Balkan Investigative Reporting Network in Albania (BIRN Albania) from December2017 to March 2018. The sample of media investigated included 44 national outlets: 11 television channels, 10 radio stations, 12 print titles and 11 online sites.

RSF’s partner BIRN, the Balkan Investigative Reporting Network in Albania, is a member of a network of local non-governmental organisations promoting freedom of speech, human rights and democratic values. Through high quality reporting and creating a pool of skilled journalists BIRN examines and scrutinises key processes, steers debates and provides the public with impartial and reliable information. BIRN Network also monitors and advocates for the transparency and accountability of public institutions and enables CSOs and citizens to influence decision-makers.

The project is financed by the Federal German Ministry for Economic Cooperation and Development (BMZ). Country studies were so far published in Colombia, Cambodia, Tunisia, Turkey, Ukraine, Peru, the Philippines and Mongolia, Ghana, Serbia, Brazil and Morocco. In addition to Albania, this year, MOM will investigate media markets in Mexico, Sri Lanka, Pakistan, Lebanon, Tanzania and Egypt. For more information visit the MOM website: http://www.mom-rsf.org