Following the Skopje 2014 Uncovered database, BIRN Macedonia is promoting a second database, on how much the government spends on agricultural subsidies and who gets them. 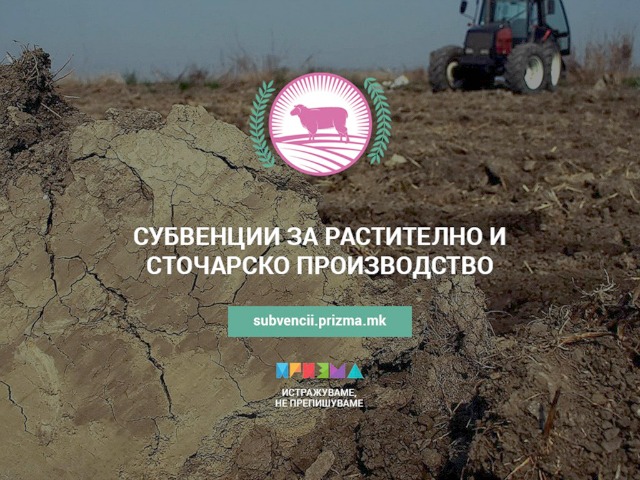 The Balkan Investigative Reporters Network Macedonia has launched a database on government agricultural subsidies from 2010 to 2014.

According to BIRN, over four years, the country has spent 150 million euros on subsidies for livestock and 296 million for crop production, making a total of 446 million.

The data come from official documents obtained from the Agency for support of agriculture and rural development, referring to direct payments for plant and livestock production.

The data reveal that most of the money, or 83 percent of the total budget, was allocated in subsidies for individuals – over 370 million in the period from 2010 to 2014.

The participation rate of companies in the budget for subsidies is 17 per cent, about 75.7 million euros.

The database records 2,480 companies that benefited from grants from 2010 to 2014 and 53 measures for subsidies.

“Pelagonija”, “Povardarie” Winery, JSC “Varda” and, surprisingly, the Ministry of Agriculture, were the top four legal entities in terms of receiving most subsidies.

“Asked why they were on the list of legal entities taking subsidies, the Ministry of Agriculture responded that it was a settling of debts to farmers. Most of the subsidies were paid during the elections, and it is interesting that companies that receive major subsidies also have accounts abroad,” Aleksandar Dimitrievski, the author of the study, said.

Agricultural Engineering Professor Jovan Azhderski, who attended the promotion, said the effect of the subsidies had been almost nonexistent, although he added that it might take time to see the difference.

“From 2006 to now we should have seen some serious benefits… in improved quality, cost, technological processes for production, but we do not eat cheaper food yet and it is questionable if the quality has improved,” Azhderski said.

He also stressed that people with the same name and surname appear in the database several times.

However, there is not enough data to determine whether they are the same people, since the ID numbers of individual beneficiaries are classified data.

The database is available at the following link: www.subvencii.prizma.mk