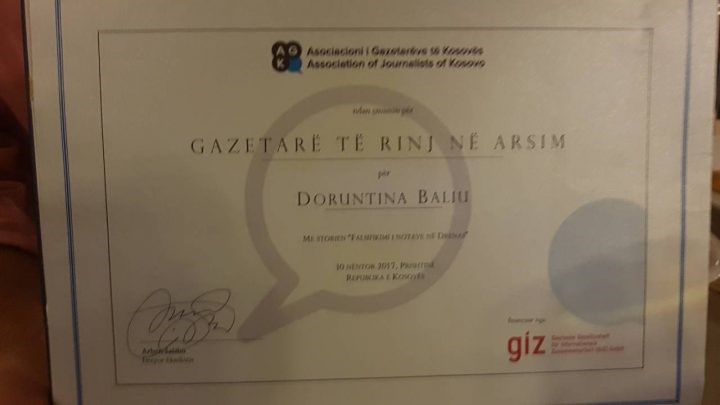 On November 30, 2017, BIRN Kosovo journalist Doruntia Baliu was awarded the “Best Story on Education” prize by the Kosovo Journalist Association and German Corporation for International Cooperation (GIZ). The award was given to the young journalist for her investigation into a grade falsification scandal in the municipality of Drenas. The story, named “The Silence toward Falsifying Grades,” was illustrated with a show published as a weekly program on “Life in Kosovo.”

The investigation into the Shote Galica School revealed that a teacher named Fehmi Ramaj curved and falsified grades for 12 students. The whistleblower in the story, Ramadan Ramaj, had noticed that the teacher, by the end of 2013/2014 academic year, had falsified the grades of 12 students, including his son’s, in the subject of biology.

However, even Tahiraj did not take the issue seriously enough or do anything more than issuing another written warning. The whistleblower, Ramadan Ramaj, continued his struggle to bring attention to the case, which according to him was a crime against students’ success, by going to Prishtina several times to take the case to higher institutions. He then submitted a report to BIRN’s anti-corruption platform KALLXO.com. According to whistleblower Ramaj, the reason why Fehmi Ramaj had this impunity was because he had a so-called ‘certified booklet’ from the political entity Democratic Party of Kosovo (PDK).

“Life in Kosovo” managed to find several other breaches in the case.

Ramadan Ramaj, despite the pressure against him, sent the case to the Kosovo Police. As a result, the Education Director of Municipality of Drenas, Tahiraj, was dismissed from his duty due to neglecting the reported case and staying “silent about grade falsification.”

Doruntina Baliu’s investigative reporting revealed this case and the damages it caused to the education system.