BIRN Kosovo hosted a series of debates ahead of Kosovo’s upcoming parliamentary elections, with the candidates for prime minister invited to present their plans for governing to a team of civil society experts. 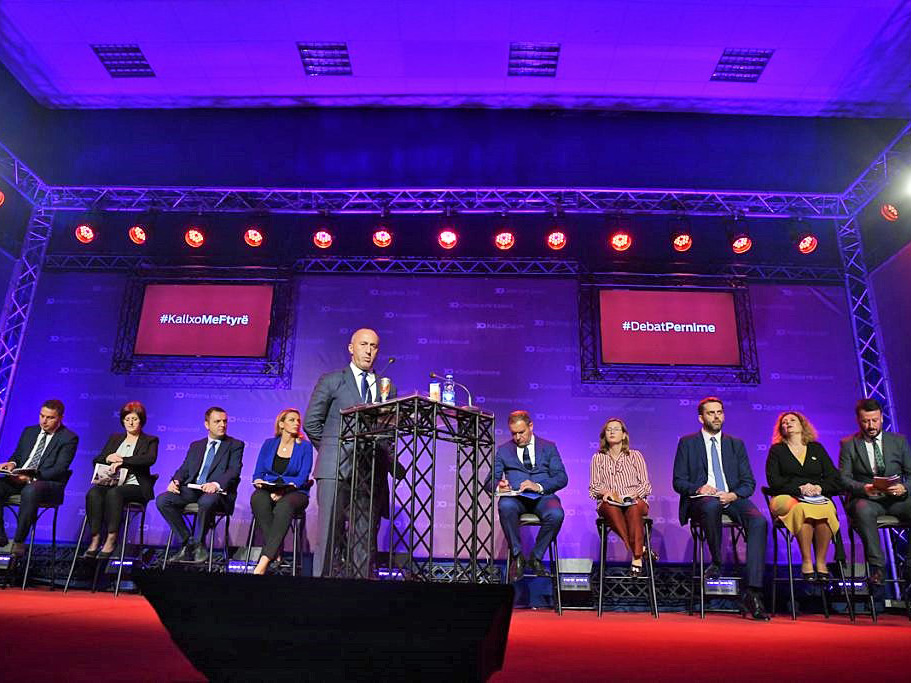 Ramush Haradinaj with his in team in #Debatforrreal. Photo: Atdhe Mulla

Over four consecutive nights, from September 26-29, in the buildup to Kosovo’s parliamentary elections on October 6, BIRN Kosovo invited all the candidates for prime minister to appear in a televised debate anchored by the organisation’s director, Jeta Xharra.

Flanked by a team of ten MP candidates from their respective parties and coalitions, each prime ministerial hopeful unveiled their plans for governing in front of a team of 24 experts invited by BIRN, who provided further questions and scrutiny.

The candidates were probed about their plans for domestic issues in particular, especially on economic development, education, the environment, social welfare and the rule of law.

Albin Kurti of Vetevendosje, Ramush Haradinaj from the coalition between the Alliance for the Future of Kosovo (AAK) and the Social Democratic Party (PSD), Vjosa Osmani of the Democratic League of Kosovo (LDK), and Fatmir Limaj from the coalition between NISMA, the New Kosovo Alliance (AKR) and the Justice Party (PD) all appeared in the debates. Kadri Veseli, the prime ministerial candidate for the Democratic Party of Kosovo, PDK, also agreed to present his plans but later cancelled his appearance.

The debates were broadcast on RTV21 and streamed through the Facebook page for BIRN Kosovo’s anti-corruption platform, Kallxo.com. Online streams reached close to one million people.

BIRN Kosovo’s election coverage will now continue with debates featuring specialists from each party on specific fields, including health, education and sustainable development.

The first was held on September 30 and focused on economic development and featured representatives from all five of the major political forces seeking representation in the Kosovo Assembly.