A Belgrade court has fined the pro-government tabloid newspaper Informer for publishing untruths about BIRN in Serbia and its editor, Slobodan Georgiev. 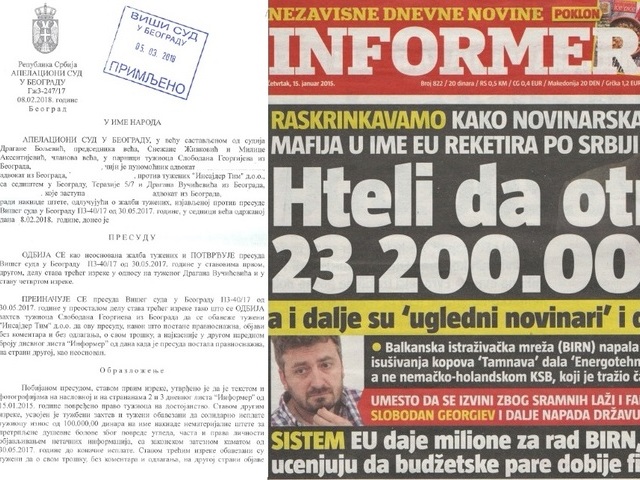 The verdict next to the defamatory front page of Informer. Photo: BIRN.

Belgrade Appeals Court on Friday confirmed that Informer published false information and damaged the reputation of BIRN Serbia editor Slobodan Georgiev in an article published by the tabloid entitled “They Wanted to Snatch 23.2 Million Euros”.

According to the final verdict, Informer’s editor Dragan Vucicevic and its publishing company, Insajder Tim, have to pay a 100,000-dinar fine (around 830 euros).

Vucicevic was also ordered to publish the verdict in the next issue of the tabloid.

Georgiev launched the case before the Belgrade Higher Court in March 2015.

Pro-government tabloid attacks on BIRN started after the publication of an investigation into the public tender for draining the Tamnava mine, which was flooded in 2014.

The tabloid alleged that BIRN had “attacked the Serbian government for corruption and crime” on behalf of the EU because the government rejected Brussels’ request to award the Tamnava mine contract to a foreign company.

The court found Informer’s editor-in-chief responsible for publishing untruths and insults that endangered the safety of BIRN’s editor.

“The case is not closed until then,” Georgiev said.

When BIRN asked Informer’s editor-in-chief Vucicevic for a comment on the verdict, he responded by directing more insults against Georgiev.