Marking its 25th anniversary, the Memorial Fund presented BIRN BiH with a certificate of appreciation for its contribution toward raising awareness about the importance of the culture of memory. 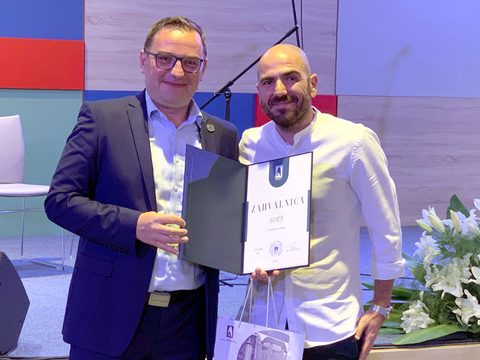 During a ceremony held on Monday, July 25 associations, individuals and institutions, governmental and nongovernmental organizations, including BIRN Bosnia and Herzegovina, were presented with certificates of appreciation for successful cooperation.

He added that, in the past few years, BIRN BiH has given away its archive of reports from trials and video materials about the massacre at Kapija to the city of Tuzla for the needs of a museum exhibition and, jointly with the Memorial Center in Srebrenica, had opened a memorial room called “The Lives behind the Fields of Death”.

“We are particularly proud because institutions dealing with the culture of memory recognize us as a valuable partner and we hope that BIRN BiH’s content will reach out to as many young people as possible and be used for educational purposes in order to stand ready to counter revisionism and denial of crimes committed during the war in Bosnia and Herzegovina,” Dzidic said.

In May this year, BIRN BiH and the Sarajevo Canton’s Memorial Fund signed a Partnership Memorandum on the basis of which the content of a database of judicially established facts, being developed within a project titled “Establishing an Interactive Educational Database on the War in Bosnia and Herzegovina” financed by the United Nations Democracy Fund, UNDEF, was disposed to the Fund.

Besides the database content, BIRN BiH also made available the complete content of a video series, “44 – Months under Siege”, containing video testimonials by Sarajevo citizens who survived the siege.

Amer Osmic, representative of the Management Board, said that the Memorial Fund was a unique institution in Bosnia with a special role in society, uniting numerous institutions and organizations in the fight to maintain awareness about the importance of the culture of memory.

“The Sarajevo Canton’s Memorial Fund has invested a huge effort during the past two years into becoming an institution which strengthens the importance of memorialization through teamwork and synergy of forces, especially in a society in which one of the gravest forms of crimes that humankind can remember – the crime of genocide – was committed in a planned and premeditated manner, in addition to ethnic cleansing and siege endured by this city,” Osmic said.

The Fund, established in 1997 by the Sarajevo Cantonal Assembly, now manages, among others, the “Tunnel D-B” Memorial Complex, also known as the “Tunnel of Life”.