Three BIRN Albania journalists were among the top four winners of a prestigious EU award. 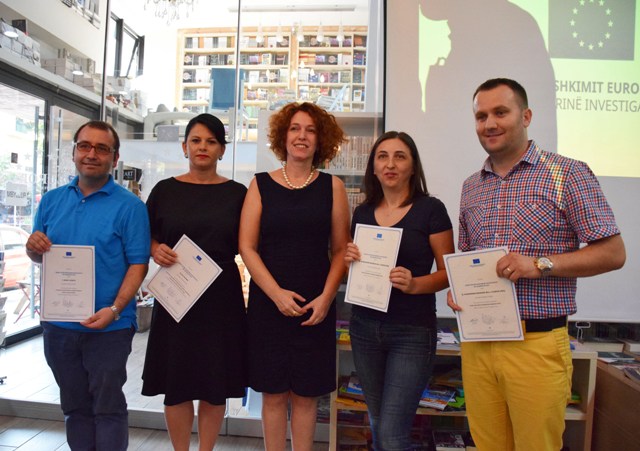 Two BIRN Albania Journalists, Aleksandra Bogdani and Flamur Vezaj, won first prize in the EU Investigative Journalism Award 2014 for Albania contest, for their series of three articles on the recruitment of Albanians to fight for radical Islamists in Syria.

The articles were published in reporter.al news portal and were republished in other newspapers and newsportals.

Second prize went to Juli Ristani, from the investigative program “Fiks Fare”, on Top Channel TV, for her story on the judicial treatment of drug users and smugglers.

Third place went to Besar Likmeta, also from BIRN Albania, for his investigation into the use of public funds by the previous government to denigrate the leader of the opposition.

Lutfi Dervishi, chair of the jury, said that many of the applications were of high quality and the jury had been faced with a difficult task. Noting that many of the winning journalists were young, he called it a good sign for the future of investigative journalism in Albania.

The awards ceremony was held on July 16th at the Tirana Times Bookshop. A total of 19 investigative stories were nominated for this year’s EU Award in Albania. The jury consisted of five media professionals and civil society representatives: Lutfi Dervishi, a media expert, Iris Luarasi, professor of journalism, Arben Muka, Deutsche Welle correspondent, Aleksander Cipa, head of Union of Albanian Journalists, and Zef Preci, director of the Center for Economic Research.

“I firmly believe that these awards we are announcing today will further contribute to the strengthening of media standards and ultimately become a benchmark for media quality in Albania,” he added.