The Balkans Investigative Reporting Network, BIRN, in collaboration with USAID’s Judicial Sector Development Programme, has begun a four-month training course for 30 journalists from Bosnia and Herzegovina reporting on war-crimes trials conducted before cantonal and district courts. 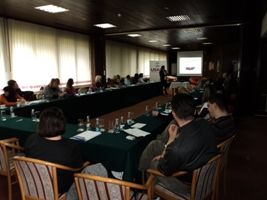 At the first training session, held on March 30 and 31, journalists had a chance to familiarize themselves with the work of the State Court and its Prosecution and to learn the importance of respecting fundamental journalistic principles in writing trial reports.

Meddzida Kreso, President of the Court of Bosnia and Herzegovina, said that from the very beginning of the work on war-crimes cases State Court judges have been aware of the influence of the media and the importance of presenting correct information, because this “contributes to building general trust in society”.

“Trials are misused in everyday political disputes,” Kreso said. “In order to avoid this, we have to convey correct information. This is why the Court of Bosnia and Herzegovina has opened itself to all media outlets.”

Selma Hadzic of the State Court Public Relations Section explained the organizational structure of the Court and court proceedings, citing major war-crimes trials that have been completed before the Court.

Local community journalists visited the premises of the Court of Bosnia and Herzegovina. In addition to courtrooms, they had an opportunity to visit the Witness Support Section. Representatives of the Section spoke about its work at the training session, explaining that the Section offers support to vulnerable and protected witnesses.

Zlatko Knezevic, a member of the High Judicial and Prosecutorial Council of Bosnia and Herzegovina, explained the process of selecting judges and prosecutors working with judicial institutions in Bosnia and Herzegovina. Vesna Budimir, Chief of the War Crimes Section with the State Prosecution, briefed journalists on the problems prosecutors face, stressing the need for better cooperation with the media.

“Journalists can criticize us when we make a mistake or do something that is not consistent with our responsibilities, but the criticism should be based on evidence,” Budimir said.

The training of journalists will continue on April 27 and 28, 2010, when practical details will be tackled – ways of court reporting, possibilities for obtaining information, most frequent mistakes and rules that have to be followed in court reporting.

The goal of the course is to train journalists in reporting on war-crimes trials conducted before courts in their local communities, as the transfer of “less sensitive cases” for further processing by cantonal and district courts as well as Brcko District Court has begun.

At the upcoming training sessions journalists will be given an opportunity to develop court reporting skills aligned with international and domestic codices and become certified court reporters in their media outlets.