BIRN’s latest feature-length documentary, which investigates the commanders responsible for some of the most brutal attacks of the Kosovo war, was screened for the first time in Belgrade. 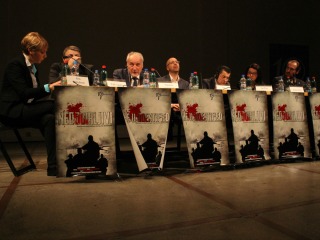 The new documentary, The Unidentified, which names the Serbian officers who ordered attacks on Kosovo villages around the town of Pec/Peja in 1999 and those involved in the cover-up operation to hide the victims’ bodies, was premiered at the Centre for Cultural Decontamination in Belgrade on Monday evening.

Marija Ristic, the director of the documentary, said the film was the result of a two-year investigation, during which one of the biggest challenges was to get witnesses to speak out about what they saw.

“War crimes are taboo in Serbia and because of that it was very hard to find everyone involved in these events, and to urge them to appear in the film which includes both victims and perpetrators,” Ristic said after the screening.

‘The Unidentified’ takes viewers back to 1999, to the villages of Ljubenic, Cuska, Pavljan and Zahac near Pec/Peja in Kosovo, where Serbian fighters killed more than 118 Albanian civilians. Their bodies were either burned or removed, and some of them were later found in mass graves at the Batajnica police training centre near Belgrade in 2001.

The trial of 11 fighters alleged to have been involved in the killings – 10 of them accused of being direct perpetrators – is still ongoing in Belgrade, but the police and army generals who gave the orders have never been prosecuted in Serbia.

Ristic, who followed the trial for three years, said she didn’t just want to make a film about the Serbian fighters on trial, but about all those responsible for the attacks and those who ordered the subsequent cover-up attempt.

“We were most interested in the removal of the bodies, because the cover-up is not in the indictment [of the 11 ex-fighters]. And we looked for those who gave the orders,” she said.

Geoffrey Nice, the former prosecutor at the International Criminal Tribunal for the Former Yugoslavia in the case of Slobodan Milosevic, said that both crimes detailed in the film were the state’s responsibility.

One of the key pieces of prosecution evidence at the Milosevic trial was the wartime diary of Obrad Stevanovic, a former assistant interior minister, in which he wrote the words “no body, no crime” in a reference to the cover-up plan.

“Stevanovic’s diary contains a reference to the state office. Through it, [the Serbian prosecution] could trace it to the top. The cover-up was the most powerful evidence of the unlawfulness of what Slobodan Milosevic was doing during the war,” said Nice, who took part in a panel discussion at the Belgrade premiere.

Nice said that the others responsible for the crimes and the cover-up should also be prosecuted in Serbia.

“This is an extremely powerful and important film, and the court should be more open to the evidence presented here,” he said.

Ivan Jovanovic, a transitional justice expert and former head of the OSCE department for war crimes and organised crime in Serbia, said that the biggest problem in war crimes prosecution in Serbia is dealing with the commanders.

“Command responsibility is not easy to prove – it depends on the willingness and courage of the war crimes prosecutors and their persistence in requesting the necessary documents from the archives of Serbian Aamed forces,” Jovanovic said.

Vladimir Vukcevic, Serbia’s chief war crimes prosecutor, said that the prosecution plans to continue investigating the chain of command, referring to the ongoing investigation of General Dragan Zivanovic. Zivanovic is a former commander of the 125th motorised brigade of the Yugoslav Army, and was in charge of 177th intervention squad, whose members are currently on trial for the crimes in the villages around Pec/Peja.

“The War Crimes Prosecution Office is in a very delicate situation as this is an ongoing case. Accusing and proving is not easy,” Vukcevic said at Monday’s debate.

Dragoljub Stankovic, the deputy war crimes prosecutor, argued however that the International Criminal Tribunal for the Former Yugoslavia dealt with the removal of the bodies during the trial of Vlastimir Djordjevic, former Serbian assistant interior minister.

“We [the War Crimes Prosecution Office] cannot find the legal means to prosecute people who ordered and participated in the body removal,” said Stankovic.

He said that these crimes should be dealt with by regular prosecutors and not his office because they were not war crimes.

But Ristic argued that war crimes prosecutors did have legal grounds to get involved.

“The removal of the bodies is not a war crime, but it is a crime against humanity and as such can be tackled by the War Crimes Prosecution Office,” she said.

Faik Ispahiu, head of court monitoring for Internews Kosovo, told the debate that people in Kosovo closely followed war crimes trials in Serbia, but a lot of anger still exists because they do not believe that justice has been served yet.

“Sixteen years after the war, nothing in particular has been done. Those crimes were committed on the orders of state officials and police and army generals, so they were not done individually,” Ispahiu said.

After its Belgrade premiere, ‘The Unidentified’ will be screened next in Pristina on May 7.