BIRN Bulgaria presented and distributed the book Moving on: Overcoming Barriers to a European Future at the Red House Centre for Culture and Debate in Sofia on Wednesday. 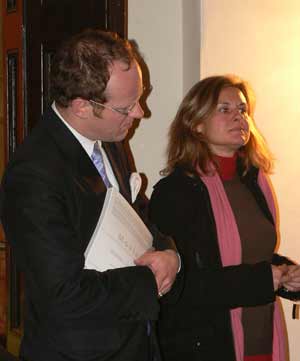 Representatives of local and international media, various embassies and NGOs, as well as friends of the organization attended the presentation.

BIRN Bulgaria Director Albena Shkodrova spoke about the Fellowship and announced next year’s programme, encouraging young journalists from Bulgarian media to apply for it.

This year’s two Bulgarian fellows gave an overview of their articles and findings. In her article, Nikoleta Popkostadinova, who received the fellowship award, addressed the exclusion of Roma from the Bulgarian labour market. Polina Slavcheva wrote about the way nationalism obstructed infrastructural development in the Balkans.

Albena Shkodrova also gave an overview of the Network’s activities over the past year. "BIRN’s political talk show in Kosovo has exceeded in popularity the most popular similar show in Bulgaria, Panorama; the Justice Report has established itself as a unique and important source of information to local and international media on the prosecution of indicted war criminals by Bosnian courts; dozens of journalists were trained on how to report about minorities in Bulgaria, Serbia and Romania," she said.

The event also provided an opportunity to announce BIRN’s commercialisation plans, and encourage the guests – most of them Balkan Insight readers – to subscribe to it.

The Balkan Fellowship for Journalistic Excellence, an initiative of the Robert Bosch Stiftung and Erste Foundation, in cooperation with the Balkan Investigative Reporting Network, selects ten fellows annually to do research within a theme related to European integration. In 2007, this was ‘mobility’, and the fellows from throughout the region covered obstacles and opportunities to the movement of goods, people and ideas in a range of sectors, including labour markets, business, justice, transport, sport, education and culture. The results were published on November 16, online and in hard copy, in English, German and all main languages of the Balkans.

To find out more about the Fellowship programme, and to read Moving On online, go to fellowship.birn.eu.com or email [email protected]