As a result of a new two-year grant from the United Kingdom’s Foreign and Commonwealth Office, BIRN is bringing together its team of journalists from across the Balkans for a two-day training. 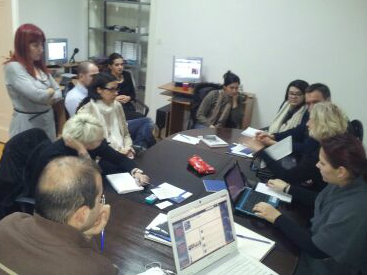 At the meeting in Belgrade from January 12-13, the Balkan Transitional Justice team will also develop a series of major cross-regional investigations, discuss project activities for the forthcoming two years and development session aimed at enhancing investigative reporting skills and techniques for covering transitional justice issues.

Those attending will include BIRN’s reporters, translators, television editor and radio producer, and the session will also introduce to the entire team the new English-language editor-in-chief for Balkan Transitional Justice, Matthew Collin.

The Balkan Insight team of correspondents and editors will also be present at the meeting for joint cross-regional editorial discussions.

“This is an important opportunity to get all our journalists together, face to face, and work on strategies and collaborative projects for the future,” said Collin.

“The exchange of ideas should be fascinating and form the basis for some important investigative work,” he said.

The United Kingdom’s Foreign and Commonwealth Office is now the third donor for the Balkan Transitional Justice project, alongside the European Commission and the Federal Department of Foreign Affairs of Switzerland.