BIRN Macedonia on Monday, December 22 held a reception to launch the book “Power struggle: Meeting Global Energy Challenges in Balkans”, containing articles by ten journalists from Southeast Europe that participated in the 2008 programme of the Balkan Fellowship for Journalistic Excellence. 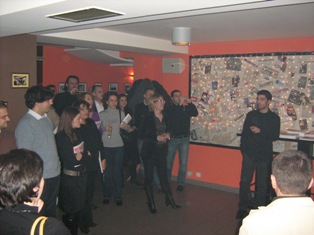 At the cocktail at Skopje’s Journalists` Club, BIRN Macedonia director Ana Petruseva presented the book containing investigative journalism stories done by this year’s fellows on the topic of energy. She spoke about the aims of the program and encouraged journalists to apply for next year.

Darko Duridanski, this year’s fellow from Macedonia who examined the energy arising from Kosovo`s independence and its impact on other similar movements in Spain and Georgia talked about his experience with the fellowship program and the topic that he worked on.

About hundred journalists and editors from Macedonia`s main media organisations attended the launch including from the dailies Vest, Dnevnik, Utrinski vesnik, Spic, as well as A1 TV, Kanal 5 TV, Alsat- M TV, Alfa TV along with representatives of embassies and civil society organisations.

Each year the BIRN teamof experienced editors and journalists in cooperation with the Robert Bosch Stiftung and ERSTE foundations is offering ten journalists from the Balkans a chance to travel and investigate their stories which are later published in their respective national media as well as published in a BIRN book.