BIRN Justice Report journalist Merima Husejnovic attended a meeting in Tuzla with representatives of associations of missing persons’ families from all parts of Bosnia and Herzegovina, organized by the International Commission on Missing Persons. 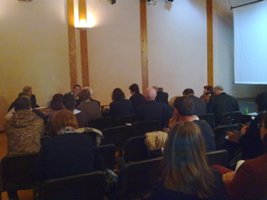 Almost 40 representatives of non-governmental organizations and associations of missing persons’ families gathered in Tuzla on March 22 and 23, 2010, with the aim of receiving information about the ICMP’s work and reviewing possibilities for mutual cooperation.

Meeting participants visited the Identification and Coordination Center, ICD, and Podrinje Identification Project, PIP, location, where they were briefed on the process and results of the ICMP’s long-term work on finding missing people.

At this meeting, representatives of missing people’s families conveyed critical comments on the work of Bosnian authorities, whom they accuse of neglecting their needs over a period of years.

“If we have been talking about the issue for 18 years and nobody is listening, it may be time to stop talking. There is obviously some problem in relations between the associations and the Government,” Fatima Fazlic, President of “Izvor” Association from Prijedor, said.

Participants criticized the fact that the Law on Missing People of Bosnia and Herzegovina, adopted at the end of 2004, is not being implemented. All the participants acknowledged that this meeting was the first in a series of meetings and it “scratched the surface of the problem that have faced families of missing people for years”.

“All meetings and conferences conclusions are identical. Nothing has been implemented year after year. This is an attempt to try to make some changes by establishing a partnership between non-governmental organizations and associations,” Klaudija Kuljuh, ICMP Coordinator for the Western Balkans, said.

Merima Husejnovic presented BIRN’s long established reporting on war crimes, which would not be possible without cooperation with associations of victims’ families from all parts of Bosnia and Herzegovina. She said she hoped this cooperation would continue.