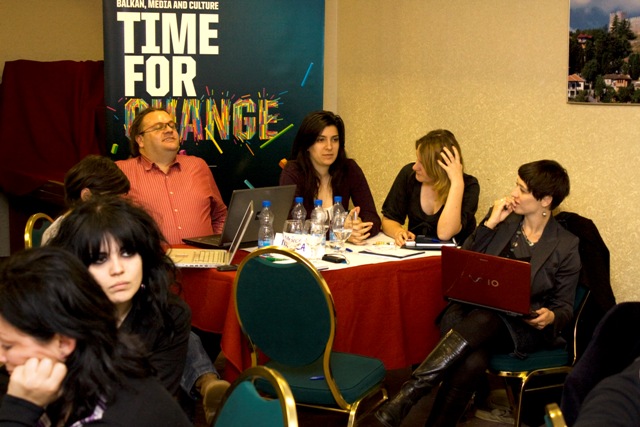 The conference, entitled “The Balkans, Media and Culture – Time for Change”, gathered more than 30 representatives of cultural organisations and journalists from the region, who gave valuable input for the creation of an editorial strategy for the BICCED project. BICCED is being implemented by the Balkan Investigative Regional Reporting Network (BIRN) and the SEEcult.org portal for the South-East European culture. The project is funded by the Swiss Cultural Programme in the Western Balkans (SCP).

Representatives of cultural organisations from Albania, Bosnia and Herzegovina, Kosovo, Serbia and Macedonia took part in the discussion, which aimed to pinpoint the main weaknesses of the local cultural scenes, as well as common problems and the ways in which regional cooperation and media coverage through the BICCED project could help serve as a platform for wider and diverse cultural cooperation and networking.

The participants agreed that there is an urgent need for more space for culture and art in the media sphere, and especially noted the lack of analytical and critical articles, which could initiate wider public discussions and contribute to faster changes and improvements in the field of culture.

Opening the Conference and presenting the BICCED project, BIRN regional director Gordana Igric announced that the production of analytical articles on cultural policies, which will start in May this year, will be published on a dedicated culture section of BIRN’s Balkan Insight web site and distributed via a monthly newsletter. Editorial output will also be translated into the languages of the region and disseminated to the more than 90 media outlets across the Balkans, both those already republishing BIRN output, and others.

Vesna Milosavljevic, director of the SEEcult.org, said that the time for changes in the fields of culture and media in the Balkans came long ago, adding that she hoped that the BICCED project would boost this process and become a sign that media organisations, primarily focused on politics, as BIRN has been until now, could be interested in problems of culture, too.

Bertan Selim, deputy regional manager of the SCP, said that SCP has a rich experience in cooperation and support to projects of cultural organisations in the Balkans and that it was searching for what was missing and what needs additional support. According to him, changes in the field of culture and media that might be triggered thanks to the BICCED project would be helpful for everyone.

Ibrahim Mehmeti, national programme officer of the Swiss Cooperation Office Macedonia, also stressed the importance of culture and communication for regional cooperation and especially for the processes of EU integration of the Western Balkans countries in Europe.

The importance of cooperation was also highlighted by Piro Misha. the executive director of the Institute of Dialogue & Communication in Tirana, who was one of the key speakers at the conference.

“We are small markets and can’t survive without cooperation,” said Piro Misha in the first part of the conference, which was open to media and gave a general overview of cultural policies in the region and the main problems facing cultural organisations.

Misha added that journalism in the field of culture in Albania has almost disappeared, accompanied by the lack of basic information about the situation and possible partners in other countries in the region.

Other key speakers included Nihad Kreševljaković, executive producer of the International Theatre Festival MESS in Sarajevo, and experts of the Compendium project: Zlatko Teodosievski, art historian, art critic and author from Skopje, and Hristina Mikić, lecturer at the University of Art in Belgrade and the Higher School for Business Studies in Novi Sad.

Common problems stressed during the introductory speeches and further discussions included the lack of national cultural strategies, insufficient public funding and nontransparent allocation of funds, politically-driven support for both organisations and appointees to leading positions in cultural institutions, incompetence in administration and policy makers circles, as well as a range of old-fashioned administrative obstacles, such as the lack of tax exemption for investments in culture.

Vivacious discussion was heard on copyright and piracy issues, especially in the publishing sector, followed by the participants agreeing on the shared problem of brain drain and lack of support for young talent, and problems of freelance artists.

Some of the most important problems were identified as the lack of the support to the independent cultural scenes, with the example of the cultural centre Tocka in Skopje, which had recently been closed.

An optimistic note to discussions was offered by guest speaker Dea Vidovic from Croatia, the chief editor and project manager of the portal Kulturpunkt.hr, who was a programme coordinator of the project Operation:City in Zagreb 2005. She gave a presentation of the tactical approaches to local cultural policies and presented the case study of Zagreb Centre for Independent Culture and Youth as a good model for advocacy practices.

The second part of the conference, which was closed to the public, consisted of two moderated brainstorming sessions on what to report on and networking strategy – using formal and informal communication tools to influence policy and opinion makers across the region.

Among the participants were Biljana Prentoska from Cultural Contact Point Macedonia/Ministry of Culture, art historian, Darka Radosavljevic-Vasiljevic, curator and director of the Remont Independent Art Association from Belgrade; Veton Nurkollari, artistic director and one of founders of the DokuFest in Prizren, Robert Alagjozovski cultural operator, journalist and art critic from Skopje, Biljana Tanurovska-Kjulavkovski from Lokomotiva from Skopje, Vala Osmani, architect, co-founder and director of the architecture department of a project institution Stacion – Center for Contemporary Art Prishtina, Silvia Dražić as a representative of the Art Clinic and Initiative for cultural policies in Novi Sad, artist Mladen Bundalo from Tac.ka from Prijedor, Iskra Geshoska from Kontrapunkt from Skopje.

Among the participants were ten experienced journalists from the region, who were selected for the first phase of the BICCED project through an open call, and who had participated in a training seminar held by BIRN experts prior to the conference. The training aimed to improve the journalists’ skills of analytical and investigative journalism.

The participants offered valuable input for the creation of an editorial strategy for the BICCED project and the dissemination of its results.