Distribution of Belgrade Insight has been stopped at Belgrade airport and at Tourist Organisation of Belgrade centres – in what appears a continuation of the government-led campaign against BIRN. 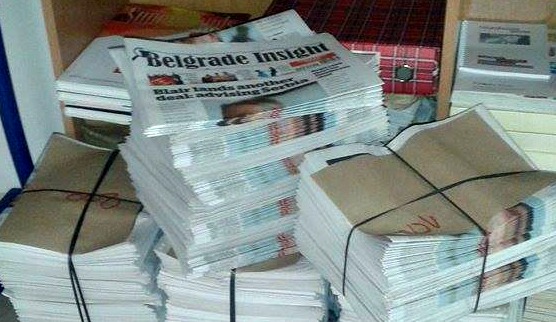 As of February, BIRN’s English language newspaper, Belgrade Insight, will no longer be distributed at one of the paper’s biggest distribution points – Tourist Organisation of Belgrade centres.

While distribution of the free newspaper has also halted at Dufry outlets at Nikola Tesla Airport, negotiations with this company remain ongoing.

Dufry, a global travel retailer that operates over 1,700 shops in airports, on cruise liners, at seaports, and other tourist locations in more than 60 countries, pulled Belgrade Insight from its venues on February 6.

Dufry, which has been hosting Belgrade Insight pick-up points since 2008, said the company had no written contract that obliges it to continue distributing the newspaper.

Miodrag Popovic, the acting director of the Tourist Organisation of Belgrade, TOB, told BIRN that Belgrade Insight’s editorial concept was not appropriate for tourist info centres.

“When in comes to distribution of your publication in the tourist-information centers of TOB, the answer lies in the definition of these centres,” he said.

“They are tourist-information [centres] and materials that there can be found there, in addition to souvenirs, of course, are those who have tourist information purposes only. Your newspapers have a different editorial policy,” Popovic said on February 20.

TOB did not inform Belgrade Insight of its intention to end cooperation.Instead, staff at TOB info-centres, visited by Belgrade Insight readers, told them they would no longer be able to pick up their copies in TOB venues. “We just got a call that we should pull the paper,” one employee told BIRN.

The sudden curbs on the distribution of BIRN’s newspaper come after the government of Serbia launched a fierce attack on BIRN in January.

This was in response to BIRN’s publication of an investigation into the tender awarded for dewatering the state-owned Tamnava mine.

The investigation said the power company EPS awarded the contract to a consortium of two companies with no relevant experience, one of whose directors is standing trial for tax evasion.

“Tell those liars that they have lied again. They got the money from [Michael] Davenport [head of the EU delegation in Belgrade] and the EU to speak against the Serbian government,” Aleksandar Vucic, the Prime Minister, said.

“We perceive the fact that Belgrade Insight is being kicked out of venues that have been our partners for years as continuation of the campaign against BIRN in which state institutions and companies – which by the nature of their job have to cooperate with the state – are participating,” she said.

“This is not happening only to us. Mechanisms for ensuring media obedience differ, from conditioning awards of commercial contracts to financial control over media,” she added.

Readers can pick up copies of Belgrade Insight at the hall of BIRN’s Belgrade office at Kolarceva 7, as well as at venues listed bellow.

Readers may order home delivery of the newspaper by visiting http://www.balkaninsight.com/en/page/subscribe-to-belgrade-insight.