At the launch of BIRN’s new video project Ukrainian journalists call for international media to keep covering the country’s Russian invasion and combat the Russian propaganda, while they are on the ground verifying the information and simultaneously trying to save their families. 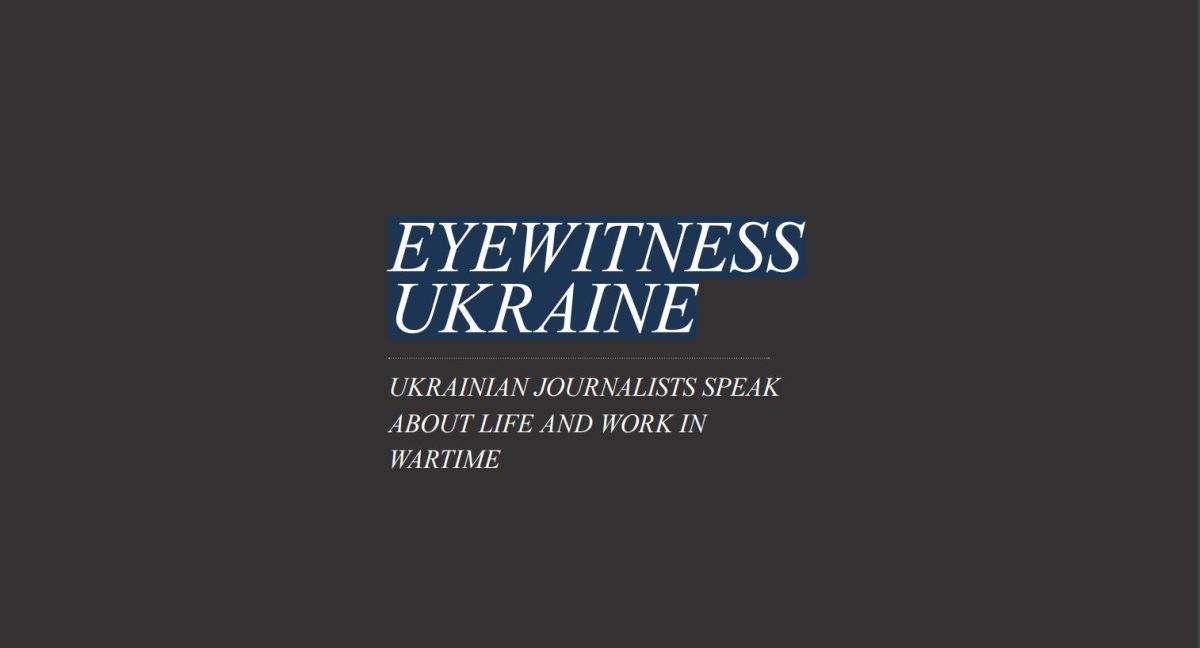 During the launch of BIRN’s new video project, Eyewitness Ukraine, on Thursday, Ukrainian journalists and representatives of international and national organizations, called on international media to contribute in fighting against the Russian propaganda on the invasion of Ukraine while explaining their efforts to verify the information on the ground and obstacles in gathering evidence of war crimes.

“European journalists should reach out to cover reality, to keep the focus on Ukraine and the larger are the chances for us to win,” Alya Shandra editor-in-chief of Ukrainian and English-language outlet Euromaidan Press, said.

The Russian invasion of Ukraine has been followed by constant propaganda and disinformation war, which has been proven very difficult for journalists on the ground who are fighting to combat it by verifying everything in its source. However, they are also in danger for their and their families’ lives due to often being a target by the Russian military despite being press representatives.

The war in Ukraine has already proved deadly for journalists. At least 12 media workers have been killed while covering the conflict so far, and many more have been injured, according to the New York-based Committee to Protect Journalists.

There is evidence that one of them, photojournalist Maks Levin, was executed by Russian forces, media freedom organisation Reporters Without Borders has claimed.

“Thirty eight journalists have been killed (since February 24, 2022) including those on the field (while reporting), those that enlisted as soldiers, and those that were killed during shelling of their cities,” said Ukrainian journalist Lina Kushch, who is also the secretary of the National Union of Journalists of Ukraine and coordinates the work of 24 regional offices with more than 18,000 members.

The Balkan Investigative Reporting Network launched its Eyewitness Ukraine project on Thursday – a new webpage featuring interviews with Ukrainian journalists speaking about their personal experiences of living and working through the Russian invasion of their country.

The Ukrainian journalists are facing constant struggles, including what they had not considered at first.

Angelina Kariakina, the head of news at the Ukrainian Public Broadcaster, said there are many “the journalists on the ground are verifying information but you need an entire car of supplies… like going in a forest”.

Kariakina says they often look “through Russian propagandastic channels and media” as a source of information to identify prisoners of war.

“They have these videos of hundreds of people in prisons, and you can see a familiar face,” she says explaining that “around 7000 people went missing during this war”.

Shandra, who has had to deal with “wanting to cover the war but had to leave to evacuate my children,” calls on international media not to use the recordings being made of prisoners of war saying that “Defenders of Mariupol (were taken prisoners) and they were recorded admitting their crimes”.

Ukrainian journalists are trying to gather as many evidence of war crimes as possible, in close collaboration with the prosecution and legal experts, to prepare cases when the time comes for the crimes to be tried in courts. However, this has been also rather difficult, especially in occupied areas.

As Kariakina explains, the journalists are dependent on information from the citizens in occupied areas who could only provide it if they manage to leave. The only way of leaving, she says, is through Russia and they can only return and provide information if they have enough resources.

Maja Sever, the president of the European Federation of Journalists, EFJ, said that she is “amazed that journalists in Ukraine have the will to fight for the truth,” considering they are in the most difficult situation a journalist can be.

As the war continues, BIRN will add more interviews to the Eyewitness Ukraine webpage to give more insights into how media workers are dealing with the ongoing stress of living through months of conflict while continuing to do their jobs.