New report underlines the changing nature of threats to journalists in Serbia over the past year. 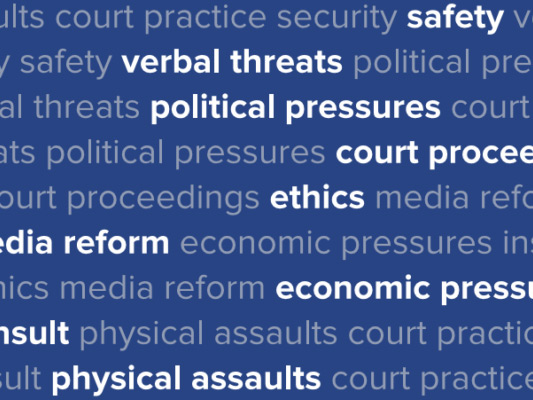 This year saw an increase in the number of threats made to media workers in Serbia sent via the internet and social networks, but also cases of surveillance.

A rise in the number of other pressures, compared to threats and physical attacks against journalists, does not indicate that journalists are safer now but that the forms of threats are changing, says a report by the Independent Journalists Association of Serbia, IJAS, published in cooperation with Civil Rights Defenders and presented on December 21 in Belgrade.

Pressures include: harassment, different forms of pressures exerted by state officials, politicians and other persons in positions of power, cases of restricting attendance or selective invitations of journalists to various public events, as well as pressures from the pro-government media on journalists and media outlets seen as critical of the authorities.

The most frequent targets of pressures are media outlets and journalists critical of the work of the government, ministers, and other state officials and local government units.

Such pressures are continuous and increasingly target journalists from TV N1, the daily paper Danas and non-profit media active in the investigative journalism such as CINS, KRIK and BIRN.

Maja Zivanovic, from BIRN’s regional publication Balkan Insight, recalled her own experiences from the June 24, 2016, when two men waited for her in front of her home in Novi Sad. At the time, Zivanovic worked for Vojvodina’s Investigative Center, VOICE.

Zivanovic underlined that on that day she was supposed to meet an interviewee for her six-month ongoing investigation into corruption in a company that distributed gas in Novi Sad.

“I decided to stop and turned around and the man who followed me did the same. I noticed he had a Bluetooth microphone in his ear and then I realized I’d been followed,” she added.

She decided to go back and check whether the man who had stayed near her building had tried to enter her apartment in which she kept the documents for her report. “The man followed me back,” she recalled.

After seeing that everything was fine with her apartment, Zivanovic again left her building and once again saw the same two men. She reported the case to the police and immediately got 24/7 police protection.

“But I realized after 15 days that I can’t work under police protection and asked for it to be cancelled,” she added.

Zivanovic said the police never revealed who had followed her that day, although she was told that they have security cameras footage.

“My only protection was to continue to work as journalist,” she noted.

Zivanovic said that, despite an awareness of the risks and dangers of this profession, she still sees journalism as a “great job”.

However, she added, since the incident, she has carried paper spray and does not come back home late.

Živanović won the first prize this year in the EU award for investigative journalism in Serbia for a series of investigative articles about the local natural gas distributor, Novi Sad Gas, whose debts to the national company Srbijagas, with whom it trades gas on the free market, doubled over two years, reaching 6.89 billion dinars.