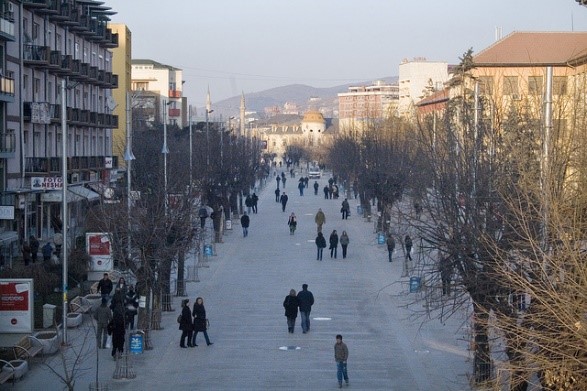 For years, Prishtina has lacked a Law on the Capital. As a consequence, the city for years now has had a smaller budget than a capital city is supposed to have. Prishtina receives a budget for 205,000 residents, when in fact there are many other families that live in Prishtina but are registered as residents of other municipalities. There are also many commuters who travel to Prishtina on a daily basis. They create expenses for Prishtina, but the municipality does not get anything in return.

Urban chaos, the absence of sidewalks and parking lots

Titled The Map of Usurpers, the map characterizes a variety of sidewalk usurpations. Areas where pedestrians cannot walk on the sidewalk have been identified, along with places where only carriages cannot pass through sidewalks, usurpers that have dominated the sidewalks permanently, barriers on the sidewalks, as well as “public barriers,” such as electric pegs and traffic signs.

The finding of a solution for parking lots has been one of the main promises of Mayor Ahmeti. Projects for underground parking lots have been initiated with the aim of being implemented in partnership with the private sector. However, these have not been implemented yet. There were clashes between the heads of Prishtina and the Kosovo Government due to the stagnation of such projects. The municipality accuses the Committee for Public-Private Partnership (compiled of five Ministers, with the head being the former Minister of Finance, Avdullah Hoti) for blockading the project for underground parking lots near the Faculty of Philology, whereas the Ministry of Finance says that the municipality has not finished its obligation to get a license from the University of Prishtina.

The underground parking lot near the University of Prishtina, which has been promised for years now, is again a promise of candidates during this campaign.

Prishtina also has issues with waste, especially sewage and polluted air. In the report published by the GAP institute, it is said that there is a non-management of the space at the area “Field of Reconciliation,” on Kolovica Street on the way to the village of Llukar: this area has 17 acres of land which is mainly used for dumping waste. In 2015 the municipality of Prishtina started making his place greener, but it was interrupted in the middle of the process with the excuse that the space belongs to the Prishtina Regional Company for Water. The municipality has removed hundreds of waste with trucks from this space in 2014. However, two years later, citizens dumped waste again, returning the area to its previous state. There is also trouble with collecting waste in the city as well as in villages.

Another problem is the Mirash Disposal, which is the place where the waste of Prishtina ends up. An investigation conducted by Life in Kosovo has revealed that the dumping of waste there is causing a great danger that could cause an ecological catastrophe. Also, the majority of suburban neighborhoods are not equipped with bins for dumping trash.

Air remains a serious concern of the citizens of the capital. The air pollution is caused by the work of KEK’s power plants, Teromokos, individual houses, and cars. In December 2016, based on the measurements conducted by the American Embassy, the numbers were alarming. The air was once announced as “damaging” and in some days also as “almost dangerous.” This air pollution mainly comes from motor vehicles, power plants where coal is burnt, wood and lignite burning by citizens, fires in mountains, agricultural burning, and industrial buildings.

Also, the capital city has problems with municipal spaces, which continue to be usurped. The Municipality of Prishtina has identified a list of usurped properties.

Prishtina has stopped illegal constructions, but it has distributed 500 other licenses within one mandate. The capital city has entered an interesting phase of discussions for making changes in urban planning, while there are many other municipal spaces that are still usurped.

Due to the non-legalization of buildings that have been built, a huge economic potential has been stuck. The citizens have bought apartments, but due to the technical decline and the legalization, they cannot use the real estate as bank mortgages; or they cannot sell, which is something that limits the circulation of assets and the opportunity of generating profits for citizens.

One of the most successful projects has been the heating provision from power plants of KEK. According to an investigation by GAP institute, it was concluded that the project of co-generation has increased the well-being of citizens through the increase of quality in heating systems, and it has also decreased the cost of producing thermal energy. The expansion of the network has three advantages: it brings cheaper bills for customers (because they currently use electricity or coal for heating), which as a consequence results in less energy consumption and less coal burning, leading to less pollution to the environment.

However, the project of heating the city currently covers only 5 per cent of the potential customers in the capital city (according to GAP), which means that there are only 12 citizens who are customers of Termokos.

During recent years, there have oftentimes been protests of public transport companies for the increase of illegal taxi drivers, which bring competition to them. According to GAP, the municipality of Prishtina has not managed to stop the circulation of illegal taxi drivers. This form of operation has severely damaged the urban traffic company, which finds it difficult to have a high number of passengers due their ability to use illegal taxi drivers. Apart from damaging the Urban Traffic company, it also damages companies that operate privately but are licensed for transporting citizens.

During 2014-2017, the municipality took seven actions to punish illegal taxi-drivers with the aim of removing them. The results of these actions lasted only a few days and the illegal taxi drivers have returned to the different routes. They are mainly seen in the line Prishtina-Fushe-Kosova, Prishtina-Podujeva, and within the city of Prishtina, especially in the Sunny Hill Street and in the relation toward the Germia Park.

Also, another problem for the municipality is the noise coming from bars during the night. According to GAP, the hotel premises in Prishtina are allowed to play music outside of their bar only until midnight. This is not respected, causing dissatisfaction especially for the citizens who live in the center of the city. This problem is especially seen on the streets Rexhep Luci, Fehmi Agani, Tringe Smajli, and nearby Street B.

Prishtina’s bill that did not manage to become a law

The majority of problems of Prishtina derive from the absence of a special law for the capital city. The bill on Prishtina, which now is subject to procedures in the assembly, would bring a few benefits to the capital city. Among others, this bill foresees the following, the additional budget worth 4 per cent of the general grant for municipalities; the right to establishing public municipal enterprises without extra approvals from the government; the secondary health or the City Hospital as well as the Directorate of Municipal Police within the Kosovo Police which would deal with Prishtina.

Blame has circulated from party to party for the blocking of this law.

The Law on Prishtina foresees that the capital city should have a budget up to 4 per cent of the total budget. In numbers, this means that Prishtina will have 14.4 million euros more in the budget.

Prishtina will a higher budget if the law is approved, but how is it going to spend that money remains a question, as Prishtina has had a budget surplus year after year.

The General Audit Office has stated that the scale of capital projects implementation and the spending of own source means from the municipality of Prishtina was not at a satisfactory level. According to the National Audit Office, weak budget implementation results in a non-efficient use of funds available, while it reduces the efficiency of plans for spending according to programs.

The General Audit Office has stated that the scale of capital project implementation and the spending of own source entries by the municipality of Prishtina was not at a satisfactory level.