The ‘Stop Censorship About War Crimes’ campaign, launched on Wednesday at a conference organised by BIRN in Sarajevo, is calling for the names of war crimes defendants not to be kept anonymous and for full audio and video recordings of all hearings to be made public. 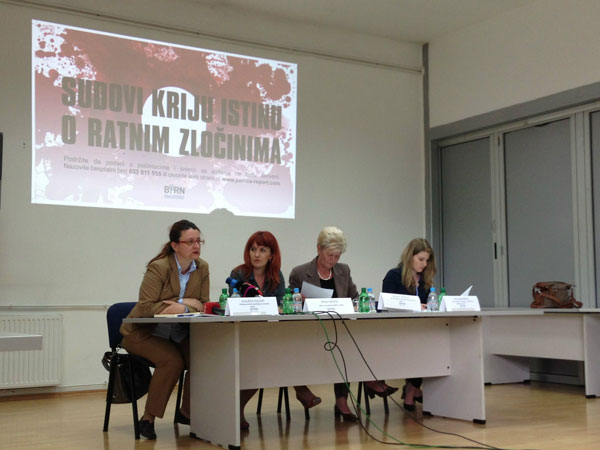 The campaign aims to amend current rulebooks which are denying journalists and ordinary citizens full access to judicial institutions in the country.

BIRN Bosnia editor Erna Mackic said that the state court uses initials instead of full names in war crimes verdicts and that it has stopped issuing full video and audio recordings from hearings.

Mackic added that the state prosecution has also stopped publishing indictments, which and prevents journalists from objectively reporting on trials.

“We want to show that war crimes are always a matter of public interest,” Mackic said.

“We should stop the selective approach of judicial institutions, so that sometimes you have direct feeds of verdicts, and other times you get a ten-minute recording. This is wrong, since crimes are crimes and all crimes are important,” she said.

Mia Karamehic from the Human Rights Centre at the University of Sarajevo said that the practices are absurd because according to the law, hearings are public.

“According to the law, media can attend hearings and report on anything. However, if they are unable and want to get a document from the court, or a verdict, they cannot, which is absurd. This renders war crime trials, for instance, meaningless,” said Karamehic.

She said that judicial institutions are refusing to accept that Bosnian law accepts the primacy of public interest over individuals’ rights to privacy.

Bakira Hasecic, president of the association Women – Victims of War, said that it is vital for victims, and the entire community, to have full access to information about such crimes. It is especially important for future generations, she added.

“We must speak openly about war crimes. If a victim wants to testify publicly, why should a court limit that right? We must end the cycle of silence,” said Hasecic.

Her view was shared by a representative of the International Commission on Missing Persons, Klaudia Kuljuh, who said that the practice breached the right to truth for all war victims and citizens.

“According to the law on missing persons in Bosnia, all victims have the right to know the truth,” said Kuljuh.

“Victims come to ask and ask about their lost loved ones. It is natural that they want to know how they died and who is responsible. That information is hidden in verdicts and this is why we want to see all institutions publish all data,” she said.

To take part in the campaign, see www.justice-report.com and www.depo.ba or call the toll-free number: +387 33 911 555. More information about the campaign and related events is also available at the Facebook page: STOP cenzuri o ratnim zlocinima.