Around 150 Serbian media outlets and NGOs are temporarily blacking out their websites or going off air on Thursday, in protest against what they see as assaults on the media’s freedom. 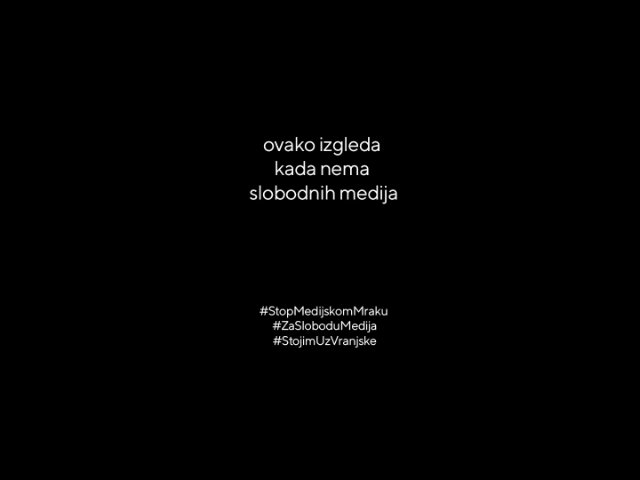 “This is how it looks like without free media” message published and aired in Serbian media on Thursday.

About 150 Serbian websites and NGOs have agreed to join a “blackout” campaign on Thursday, called “Stop media darkness”, to protest over what they called the worsening situation of the free media in the country.

“We want to warn the public that freedom of media in our country is running out of breath, and we want to fight together to save it,” a joint press release of the participating organisations – which include BIRN – said.

Media outlets including Balkan Insight as well as NGOs are blacking out their websites for one hour on Thursday while carrying the simple message: “This is how it looks without a free media”. Supporting print media carry a black page.

Just a few major print media outlets joined the campaign, with none of those with state ownership participating.

The dailies Danas and Kurir and the weekly Vreme published messages in support of the campaign on their front pages, while in the daily Blic, owned by Germany’s Ringier Axel Springer, only the independent cartoonist blacked out his cartoon of the day.

Television and radio stations will be air jingles and videos with the campaign message during the day.

The protest follows a recent incident on September 18 when the Defence Minister Aleksandar Vulin’s political party called the editor of the Serbia’s Crime and Corruption Reporting Network, KRIK, Stevan Dojcinovic, a “drug addict” – in apparent retaliation for his published investigation into the minister’s real estate puchases.

Soon after, Vukasin Obradovic, the founder of Vranjske novine and former head of the Serbian journalists’ association, went on hunger strike in protest over his title’s closure and what he called the decline in media freedom in the country.

Media and NGOs say the campaign is designed to remind people that some free media still exist in Serbia. “From here we start,” the joint press release adds.

A progress report published by the European Commission in November 2016 noted that Serbia had made no progress, and had only carried out “some level of preparation”, in terms of supporting freedom of expression.

“The overall environment is not conducive to the full exercise of this right [to media freedom],” the report stated, adding that threats, violence and intimidation against journalists were issues of concern.

The watchdog organisation Freedom House in its latest report said that Prime Minister Aleksandar Vucic and media outlets aligned with him had escalated a drive to portray all investigative and critical media organizations as foreign-backed propagandists seeking to damage the government and destabilize the country.

“Self-censorship was a worsening phenomenon that journalists attributed to concerns about both harassment and economic pressure,” the 2015 report, published last year, said.

It said journalists in Serbia continued to face threats and physical attacks. “Some of the most visible pressure on the media came from Prime Minister Vucic and his allies, who continued to verbally harass critical journalists and outlets”, it said.

The UN Human Rights Committee has also expressed concern about Serbian officials publicly vilifying and intimidating media workers and about the prosecution of journalists and civil society actors for expressing their opinions.

The Serbian state should refrain from prosecuting journalists and human rights activists, should take steps to protect media workers from intimidation and sanction the perpetrators of such offences, the report, published in March, said.