Ten pilot projects from Albania, Bosnia and Herzegovina, Kosovo, Macedonia and Serbia have been launched as part of Resonant Voices Initiative, all aimed at challenging polarising, inflammatory and radicalising narratives. 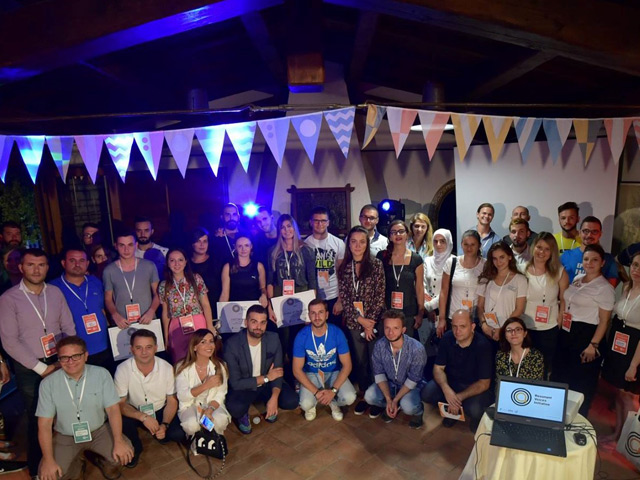 Among the ten pilot projects launched as part of Resonant Voices Initiative, the Provjeri.me team from Sarajevo have used a creative approach to create a ‘fake news’-busting game to combat misinformation and propaganda and to prevent the sharing of potentially dangerous content among young people in the Western Balkans.

“Nobody wants to be lied to and everyone wants to have fun” is the simple premise on which the team behind Provjeri.Me based their prototype.

Their online game ‘Faketective’ is an educational and entertaining tool which will help people to learn how to recognise and verify problematic content online. The player is put in the shoes of a young journalist who has several tasks before she gets a coveted job with a respected new media outlet.

In order to win the Faketective game, players must successfully debunk incidences of ‘fake news’. The project aims to improve the digital media literacy skills of young people in the Western Balkans.

The Ordinary Heroes project, also from Sarajevo, utilises the video content of oral histories of wartime inter-ethnic rescues to create short videos that look at the present day inter-ethnic tensions through the prism of these positive stories from the past, tackling the prevailing divisive narrative based on glorification or vilification of war-time political and military leaders.

Its videos target an audience that includes football fans or groups on social networks that have ties to nationalism.

Humans of the Balkans is a crowd-sourced platform for photos and stories of ordinary people from all over the region, to celebrate its diversity, beauty and potential.

The basic idea is very simple: building a common online space for ordinary people and their stories. While focusing on collecting and sharing positive and inspiring life stories, it also encourages contributors to identify problems and issues they see around them and suggest how they can be solved, so that injustices and grievances can be addressed.

Portal Kultura’s tag line, which translates as “a generational scream against the reality in which we are growing up”, is both the inspiration for the project’s name (KRIK [Scream]) and captures its philosophy and strategy – giving young people a space to express themselves as bloggers, writers, creators and critics, encouraging them to think independently, embrace alternative views and speak out against divisions and hate in their communities.

The portal is run by a group of volunteers from Banja Luka who in the recent months organised workshops in Drvar, Kostajnica, Derventa and Kotor Varos as well as contributed to the organization of Applause Fest, a theatre festival in Banja Luka showcasing performances from all over Bosnia and Herzegovina.

In the portal’s own words: “We are bringing you stories from different parts of Bosnia and Herzegovina. How did our peers overcome hate speech? How have they resolved existing problems? How did they act preventatively in their local communities? You can find out all this by following our portal. We bring you stories that will not leave you indifferent. Stories that will make you think.”

Story2Tell, a project by the Skopje-based NEXUS Civil Concept, uses the power of human stories to shed light on the experience of one man who regrets his journey to Syria to participate in the war, and engages in positive messaging amid the prevalence of vulgar and violent content online in Macedonia. Story2Tell collected information about reactions to its video pilot project and found that the video drew strong emotional responses from viewers.

Pristina-based project Women of Resilience is an initiative determined to tip the balance in the public discourse and policy discussion about foreign fighters, currently dominated by male voices and experiences.

The Institute for Dialogue and Nondiscrimination strategically and sensitively brings women’s stories into the mix, focusing on empowering those left behind and those who followed their husbands to the conflict zone, giving them a platform to share their experiences to prevent future departures and build these women’s resilience to extremist propaganda and recruitment.

The Jasmine project, in collaboration with Gazeta Mendimi and the Women’s Center for Development and Culture Albania from Elbasan, works to train a new generation of journalists in writing about violent extremism to improve both the quantity and the quality of articles written on the subject in the Albanian language.

CVEinfo.AL is another initiative supported by Resonant Voices, which has developed a web portal and a virtual library of existing resources related to the fight against violent extremism in the Albanian language, as well as news, updates and information about ongoing and new initiatives in this field, to support Prevention and Countering of Violent Extremism practitioners.

In Macedonia, statements that provoke hate among religious groups and issues between the religious groups themselves have been a longstanding issue. The Partnership for Actions on Cohabitation and Tolerance, or PACT, tackles the use and misuse of religion, religious messages and religious communities head-on by bringing together 20 future leaders from both communities to get to know one another.

No Hate Speech seeks to educate citizens in Presevo about the harmful effects of use of hateful propaganda and to promote the use of respectful and tolerant terms, targeting those who produce and distribute fake news, misinformation, or hate speech on the internet.

Resonant Voices Initiative is a joint programme run by CIJA US, BIRN and the Propulsion Fund to challenge extremist narratives in public discourse throughout the Western Balkans – in particular those disseminated online.

The programme aims to equip critical voices in the target countries with the skills, know-how and resources to counter radicalisation, the recruitment of foreign terrorist fighters and violent extremists, and other dangerous trends. It empowers a diverse group of civil society actors – activists, journalists, bloggers, educators and other online (and offline) influencers – to become resonant voices, able to counter violent extremism, to push back against extremist propaganda and to increase and amplify alternative, positive messages.