Three of the four candidates running for the mayor of Gracanica, among them the current Mayor Bojan Stojanovic from Savez Kosovskih Srba (League of Kosovo Serbs ), did not give many promises during the “Life in Kosovo” municipal debate.  They provided no solution to the problem of stray dogs, considered a nationwide problem. The fourth candidate, the Serbian Citizens’ Initiative, did not take part in the debate. 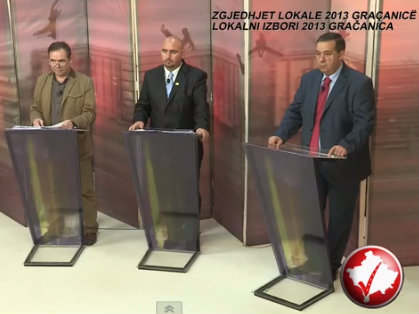 Stojanovic was proud to say that during his mandate he has bought a positive atmosphere to the town.

Stojanovic boasted mostly about the municipal diagnostic center, citing it as the most advanced in the region and pride not only for Gracanica, but Kosovo too.

“We even opened a zoo,” said Stojanovic, while citing other municipal achievements.

However, the municipality’s issues go beyond than this.

Stojanovic’s rival Slobodan Denic from the Simonida Initiative  his political entity would prepare a long term plan for 24-hour water  and install more waste containers so people don’t throw trash on the streets.

Anton Smajli from PDK promised equal access to all citizens regardless of their religion or ethnicity.

No solution for stray dogs

Gracanica candidates consider the problem of stray dogs as a national problem, arguing they cannot kill or turn them away.

Denic proposed to castrate them and put them in shelter, while Smajli accused the municipality of not financially supporting a shelter proposed by an organization which collected 50 to 60 dogs.

Stojanovic disagreed with Smajl’s statement, saying the organization has only changed its location.

Smajli accused the municipal government of the using asbestos pipes for water supply, pointing out that such material is carcinogen.

Smajli made clear that if he  were elected  mayor he would completely remove these pipes and replace them with new ones, a project that would cost 1 million euros.

Stojanovic said that water supply is managed by regional companies and not by the municipality.

The debate touched upon the garbage issue and Denic proposed to open a new landfill. Smajl disagreed, saying garbage is not a major issue in Gracanica.

The current president promised the residents of Kishnica new schools and the decentralization of health and education workers from the capital budget, all paid by the Gracanica municipality. Stojanovic said that the road to the village will also be paved.

Smajli  the municipality has no means to build a new school, but the Minister of Education and Prime minister promised to help building it.

Young players of  Gracanica football team have visited Italy and played a few games with their peers of Lazio, Juventus and Turin. Mayor Stojanovic said the development of sport is his priority. He said the Partizan Belgrade football team was interested in taking three of these young players.