The 21 investigations selected for the 2018 EU awards all highlighted the way courageous journalists in the region continue to raise the bar and challenge cultures of secrecy, corruption and impunity. 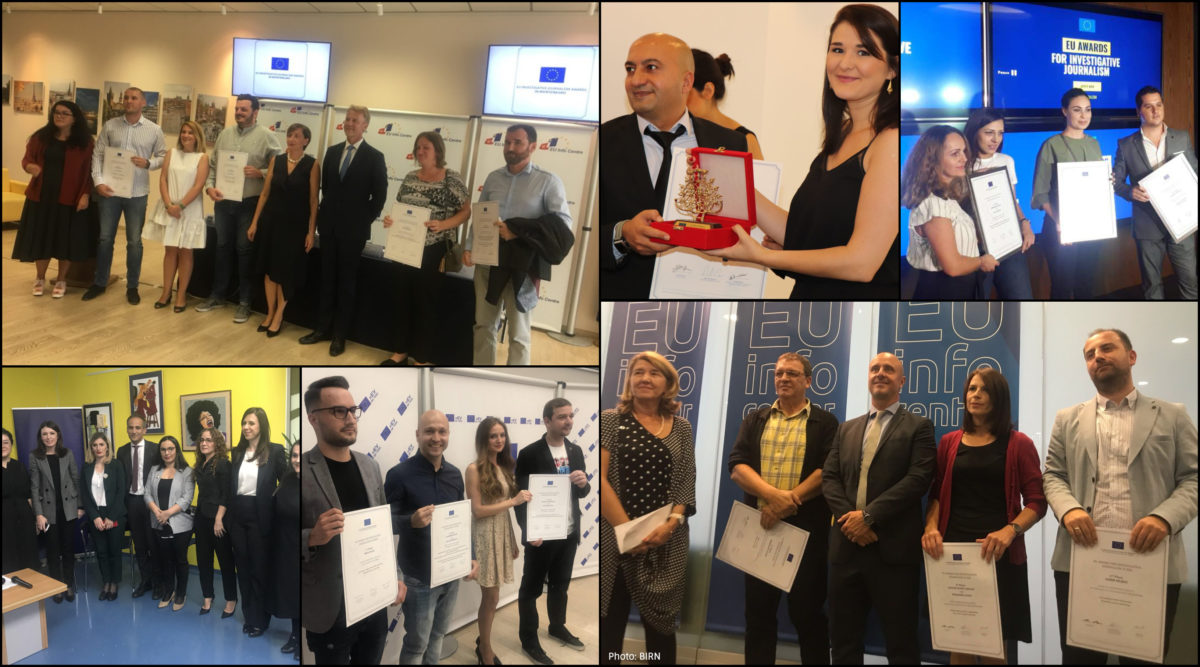 From revealing corruption among officials, institutions and public figures to revelations of ties between politicians and criminal organisations, the winners of the 2018 EU Awards for Investigative Journalism in six countries of the Western Balkans and Turkey shaped public opinion and made an impact through exceptional watchdog journalism.

The awards aim to celebrate and promote the outstanding achievements of investigative journalists as well as improve the visibility of quality journalism. In this year’s awards, 30 journalists were given prizes for 21 remarkable investigations.

The 2018 EU Awards kicked off on Turkey, with a dozen quality investigations, but three stood out.

Hayzel Ocak’s investigative story about corruption in the real estate industry, “Unprecedented Betrayal”, showed how Istanbul’s urbanization plan was destroyed by privileged zoning rights, which were granted to a few. Ocak was awarded first prize at a ceremony held at the Press House of the Association of Journalists in the capital, Ankara. The jury deemed the story “a product of outstanding and courageous research, which was additionally presented very clearly”.

Second prize in Turkey went to Dinçer Gökçe for “Turkey’s List of Shame (Part 1 & Part 2),” about 115 underage girls and the gross negligence of officials in public hospitals. In his investigation, Gokce examined the records of 115 children who came to hospital between January 1, 2017, and May 9, 2017, one by one.

According to the records, 77 of the 115 found to be pregnant were over the age of 15 while 38 were found to be pregnant below the age of 15. The pregnancies were never reported to the authorities, even though it was mandatory to do so by law. After the publication of Gokce’s investigative article, the authorities launched an investigation against the hospital and everyone involved in these cases. The jury viewed this story as an example of systematic wrongdoing that demonstrated the need for greater transparency in governance. Not only was it expertly researched, but it was also masterly and courageously presented, casting a spotlight on some very serious problems in the country, they said.

Fevzi Kızılkoyun won third prize for an investigation in to the death of Gazi University student Şule Çet, who fell to her death at 4am from the 20th floor of a plaza in the Çankaya district of Çağatay. Her death might have been closed as a suicide had the autopsy report not come into the hands of this journalist. Through a thorough investigation, Kızılkoyun pursued justice in “Secret of the 20th Floor / Truth Revealed by the Autopsy”. The case was eventually closed as a case of rape and murder. The jury stated that the story was researched by the careful and dedicated journalist who had uncovered important evidence despite being confronted by a wall of ignorance.

In North Macedonia, 20 high-quality investigations were in the running for prizes, but three were most noticeable. First prize went to Snezhana Lupevska Sozen, Miomir Serafinovic and Biljana Nikolovska, for “Citizens Identity Theft for Criminal Purposes”. This researched the fate of Zlate Stojanovski who has wrongly accused and went to jail in a case of stolen identity. The journalists revealed the details of the case, the mistakes made by institutions and the state, and the stolen identity that cost Stojanovski his freedom. The jury members deemed it a product of outstanding research.

Veles, a small town in the north of Northern Macedonia, become famous after the 2016 US presidential elections, when media outlets revealed that young men from here were running over a hundred websites that pumped out often false viral stories in support of the candidacy of Donald Trump. In “The Secret Players Behind Macedonia’s Fake News Sites”, Saska Cvetkovska uncovered new information and added fresh details to the story of the fake news boom in Veles. Cvetovska won second prize and praise from the jury for her indepth investigation.

First prize in Albania went to Esemeralda Keta and Elisa Gjerani for “Premature Baby Deaths Rise in Albania’s Cash-Starved Hospitals”, an emotional and touching deep probe that exposed the lack of incubators and other medical equipment needed to treat premature babies in Albania’s maternity hospitals – and believed to be a factor behind the alarmingly high child mortality rate in the country.

Endrit Habilaj was awarded second prize for the TV documentary “The Destruction of Valbona”, which used footage and documents to show the deterioration of the heart of the “Albanian Alps”, exposing evidence that hydropower developers are building plants illegally and in contravention of court orders, so destroying the environment and tourism.

Ola Mitre won third prize for exposing the added and often hidden cost that patients face when they undergo surgery in private hospitals with medical packages subsidized by the Health Insurance Fund, in “The Hidden Costs of Free Cardio Surgeries in Private Hospitals”.

In Montenegro, Jovan Nikitovic won first prize for an extensive investigation into one of the biggest cases of cultural negligence in the country. His investigation into the disappearance, theft, damage or destruction of 14,475 exhibits in the National Museum and other museums in Montenegro.

Second prize in Montenegro went to Maja Boricic who tackled the country’s growing environmental problems in “Medical Waste in Montenegro – A lurking menace”. In this well researched and reported story, Borcic presented new information and revealed that not all pharmacies in the capital, Podgorica, follow the same standard when it comes to dealing with medical waste and that the disposal of more than a thousand tonnes of such waste was not supervised.

Dejan Milovac and Lazar Grdinic won third prize for their investigation into donations to the ruling party from the poorest part of Podgorica ahead of elections, which went through the roof. Milovac and Grdinic shone a light on the hidden world of election and party financing frauds in “Citizens’ donations, or black-funds”.

In Serbia, the ties between political figures and criminals were revealed in the investigation “How Serbia’s Health Minister Helped a Criminal Avoid Trial”, by Dragana Peco and Stefan Dojcinovic, which won the first prize in the EU Awards in Serbia. Their thorough investigation revealed the shady connections between Minister of Health Zlatibor Loncar and mobster Petar Panic, who avoided a court hearing and eventually jail time thanks mainly to his connection to top officials.

Vladimir Kostic and Dina Djordjevic won second prize for their two articles, “Small hydroelectric power plants: the state and companies connected to Vucic’s best man profit most”, and “From Nigerian scheme to clandestine EPS procurement worth millions”. Kostic and Djordjevic shone a light on the controversial and lucrative business of small hydro-plants. They discovered that more than 7.2 million euros was paid between 2013 and 2016 to companies connected to Nikola Petrovic, the best man of President Aleksandar Vucic, and his business partners.

Milos Stanic discovered that almost a million people in Serbia, Croatia and Hungary are exposed to carcinogenic drinking water with arsenic levels above the legal limit, so winning third prize for “Toxic Taps: Arsenic in Water Stirs Cancer Fears”.

In Bosnia and Herzegovina, Amarildo Gutic won first prize for his documentary “The State against David”, which reconstructed the last hours of the life of David Dragicevic, a young man whose unresolved death sparked major tensions in the country. The jury’s summary of the award said Gutic had transformed a personal and family tragedy into a story that convincingly spoke about the pathology of institutions and the entire government.

Second prize in Bosnia went to Semir Mujkic for “Corruption in Public Procurements”, a series of investigative articles on corruption practices in public procurement in Bosnia published during 2018. In addition to the articles, Mujkic made a database of year-round live tracking of spending on official vehicles.

Renata Radic Dragic and Mubarek Asani won third prize for their multimedia investigation “Veterans against Veterans’ Associations”,  a story that was the result of months of research and data collection from all levels of government. Having reviewed hundreds of documents, they proved that Veterans’ Associations had misused money intended for veterans. They revealed that at least 40 million euros were paid out to about 1,600 veterans’ associations over the six-year period. Some of the money was misused by individuals, and veterans never saw the benefits intended for them.

In Kosovo, Saranda Ramaj won first prize for her investigation, “Warehouse of Pharmaceutical Abuse”. Ramaj showed that the monopoly created by pharmaceutical companies in 2016 and 2017 enabled them to hike drug prices, and that this was permitted by the state. Ramaj’s story led to an investigation of the Ministry of Health by State Prosecution and the suspension of the sale of questionable drugs.

Second prize went to Serbeze Haxhiaj for “Kosovo’s Political Murders: Unpunished, Not Forgotten”,  a story about the local authorities and international missions that failed to jail the perpetrators of a series of political assassinations and gun attacks after the Kosovo war ended. The jury praised the story for giving “a voice to those who will otherwise not be heard”.

Third prize went to Ardiana Mehmeti for the series “Exploitation in Telecom” (link, link). Mehmeti’s work focused on the business of Telecom of Kosovo whose owners are either unknown or politically connected. After receiving the award, Mehmeti talked about the threats she had received during her investigation, and the money offers she was given to stay silent.

Although the Balkan region is clearly not a safe environment for journalists to produce independent news content, Mehmeti and the others who received awards in the 2018 EU Award cycle showed persistence and perseverance in investigating topics of public interest and importance.