As Vladimir Putin visits Belgrade, BIRN journalists have used the occasion to call on the Kremlin leader to release imprisoned journalists in Russia and respect human rights. 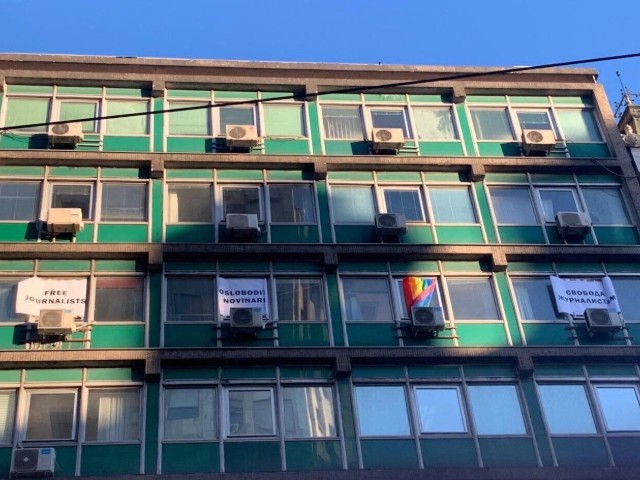 BIRN journalists in Serbia on Thursday held up banners asking Russian President Vladimir Putin, who had arrived in Belgrade, to release imprisoned journalists in Russia and to respect human rights.

“Free journalists,” said a banner in Serbian, Russian and English held from the windows of the BIRN office, close to where supporters of Putin in Serbia were gathering for a rally.

The BIRN office also displayed an LGBT flag, calling on Putin to respect human and LGBT rights in his country.

In its latest report, the rights watchdog Human Rights Watch, HRW, noted that a law against so-called gay propaganda was having a negative impact on lesbian, gay, bisexual, and transgender people and on the young also.

“The 2013 law exacerbated the hostility LGBT people in Russia have long suffered, and also stifled access to LGBT-inclusive education and support services, with harmful consequences for children,” HRW said in December.

The Russian President is meeting his Serbian counterpart to sign a series of agreements and memorandums, highlighting the warmth between the two Slavic countries.

Our journalists in Serbia today set up banners asking Putin, who was visiting Belgrade, to release imprisoned journalists in Russia and to respect human rights. pic.twitter.com/uKcFCwC6DT

Serbia and Russia are close diplomatic allies. Russia has strongly supported Belgrade in rejecting Kosovo’s independence, while Belgrade has refused to criticise or sanction Russia for its actions in Ukraine and the unilateral annexation of Crimea.