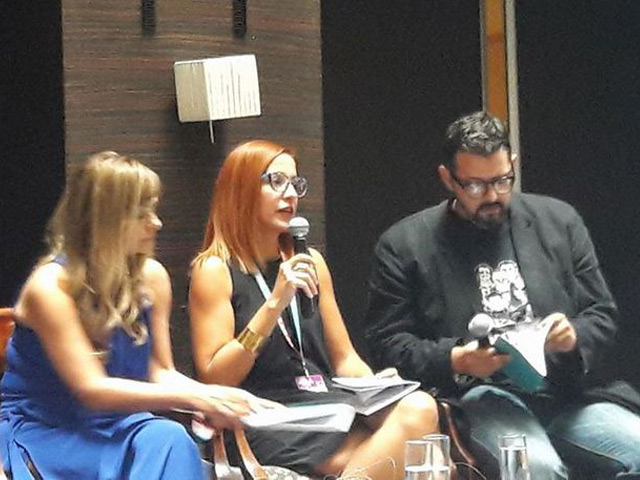 Mirna Buljugic, the director of BIRN's Bosnia and Herzegovina office

Buljugic presented three pitches as part of the Sarajevo Film Festival’s ‘Dealing with the Past’ programme, all of them based on stories on which BIRN BiH has reported.

“All our pitches are about the war, but all these stories define the lives of the Bosnian people today,” said Buljugic.

The first pitch was for a documentary about Ibro Delic, a Bosniak who joined the infamous ‘El Mujahid’ unit of Middle-Eastern fighters during the Bosnian war, became a member of the Salafi movement, and who in 2013 went to Syria.

Upon his return he was convicted of terrorism, and is currently serving his sentence.

The second story was about Franc Kos, a member of the Croatian Defence Council at the start of the Bosnian war, who then transferred to the Bosnian Army, and finally in 1994 switched to the Bosnian Serb Army and took part in the Srebrenica genocide. He was convicted and is serving his sentence.

The third story was about defectors hiding in Serbia in 1995, when they were arrested and handed over to the Bosnian Serb police.

They were trained for a few months at the Jahorina Training Centre and then sent on their first mission – the Srebrenica attack of 1995. Some took part in the killings and are now serving prison time.

This is the second year in which BIRN has taken part in the ‘True Stories Market’.

Last year, a pitch from BIRN BiH about a Srebrenica man called Ramiz Nukic, who spends his days searching the woods for remains of those killed in the massacres, was picked up by Al Jazeera, which made a documentary movie which was shown at this year’s Sarajevo Film Festival.