With five women and one man sitting around a table a decade ago, a decision was reached in the spur of a moment without any concrete plan for the future. Balkan Investigative Reporting Network, BIRN was born. It was a sound of fury and exasperation – a stark reminder that endless negotiations on the future of IWPR’s Balkans programme had come to a fruitless end. That end was our chance for a new beginning. 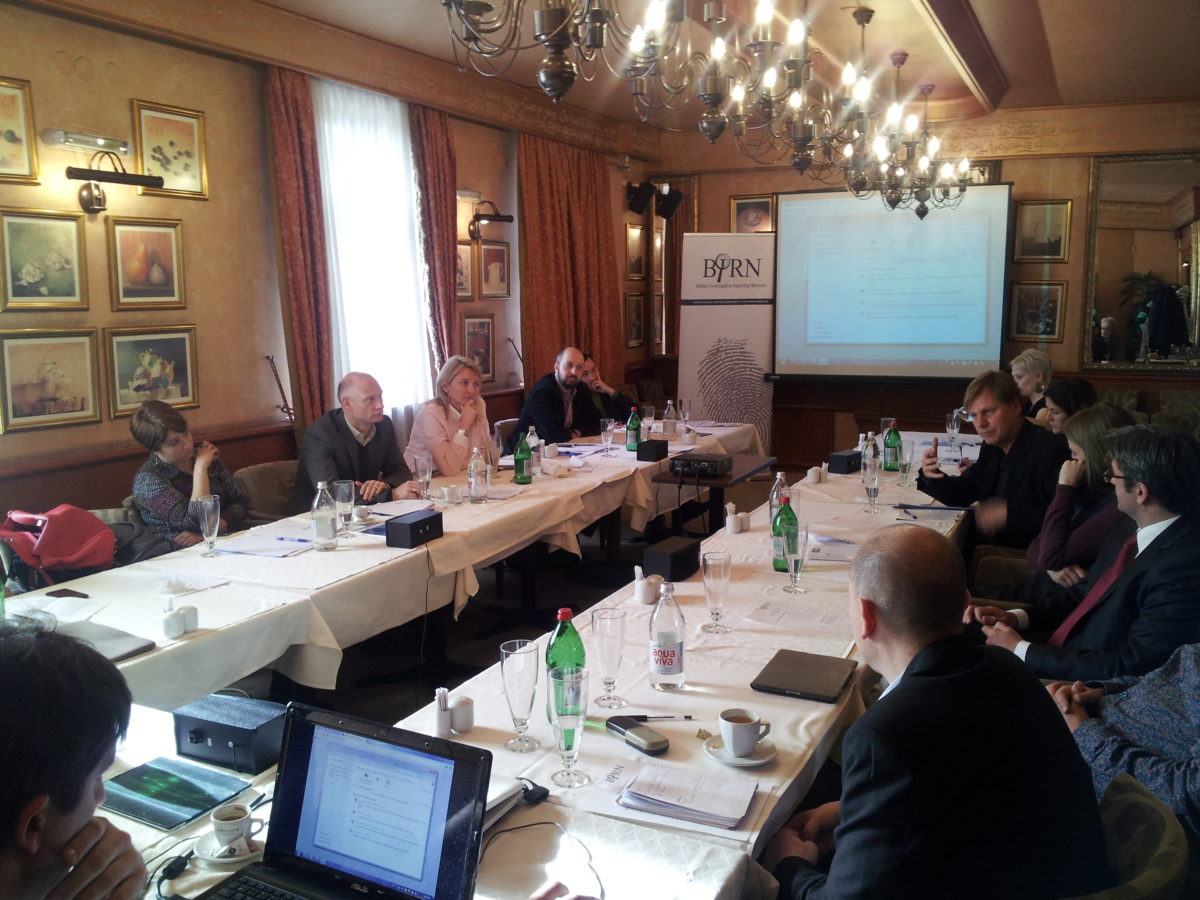 As a favor to us, a graphic designer friend went ahead and created the BIRN logo with a magnifying glass spotlight on investigative journalism. The idea of naming our newsletter Balkan Insight Report was unanimously accepted and off we went. Our funds and ambitions at the time certainly did not match up.

One of the first concrete things we did was to produce a film on the future of Kosovo: “Does Anyone Have a Plan?” We encountered numerous obstacles. Tempers were rising high as we found ourselves often having to deal with comic situations laced with flaring egos and unrealistic demands. The film that we produced almost ten years ago was a huge success. The title as well as some of the content are still relevant.

It was just the first step of many more to be taken. We learned to work together and more importantly to understand that the interconnectedness of the issues in the Balkans creates a puzzle. Like almost everything in this region, the full picture of social, economic or political themes is revealed only when you look at it from various local angles.

This approach is reflected in the very structure of BIRN, a major regional network in the Balkans, where each office follows its own unique projects with possibilities of pulling together resources and skills for cross-border investigations into issues like organised crime and corruption. At the same time, we were made painfully aware that the “Brotherhood and unity” we were so indoctrinated about in former Yugoslavia was now fully operational and flourishing only in the criminal world.

At the beginning, we spent a lot of time thinking about the kind of reporting that we should be aspiring to. We asked ourselves many questions: if politicsis imagined as a football match, are we journalists just spectators, referees or fans of a particular club? Are we as human beings ever fully objective or do our own perceptions and views inevitably find their way into our writing?

“Write what you can prove” was the mantra we decided to follow from the beginning. In the ongoing journalistic battle of facts vs opinions, whilst reporting we strove to stick to the facts.

This is the core of inquisitive journalism that is focused on public interest. This is also the core misunderstanding between the political establishment and journalism in the Balkans, where politicians traditionally treat the press as a transmission channel that exists for the sole purpose of conveying their messages to the people, unchallenged, it goes without saying.

However, journalists should be watchdogs not lapdogs. It is the facts and public interest that they are after. BIRN’s noble principles in publishing, media training and promoting public debate are quality, reliability and impartiality.

This commitment has never wavered in the past decade as a dedicated and close-knit team of journalists across the Balkans continues to probe and analyse key transitional issues while providing objective, balanced and comprehensive reporting.

There is a price to pay for such an approach. Some of the recent attacks on the organisation as a direct consequences of its reporting are evident, from the murky decisions to ban the distribution of Belgrade Insight newspaper to articles alleging various conspiracy theories, written on the orders of those who would rather shut BIRN down than face the truth.

Each office engages in relevant local media development projects. In Bosnia, for example, the focus is on war crimes reporting, whilst Serbia concentrates on public expenditure themes and Kosovo produces TV debates on current affairs.

The regional activities of the Network, such as editorial, operational and development work, are coordinated through the BIRN Hub registered in Sarajevo. The Hub coordinates projects such as Balkan Transitional Justice and Culture Watch, numerous cross-border investigations and regional trainings.

Can this kind of journalism be fully sustainable in non-existing media markets in the Balkans?

This is a question for policy makers. Media reforms are under way everywhere in the region and liberal media legislation is in place. The right to freedom of expression is enshrined in all constitutions. However, pressure on the media is becoming more sophisticated and more difficult to spot. To influence the media’s output, interested parties have to control their sources of income.

These financial rugs are routinely pulled from under the feet of the press by withdrawing advertising contracts or banning their distribution. Popular current affairs programmes are taken off air to punish critical reporting. This happens on a regular basis and in a blink of a powerful eye.

Aware of this situation, BIRN established a company, BIRN LTD as far back as in 2007 with the intention to develop commercial products designed to feed its non-for-profits services. Though the income generated from this is steadily rising, it is still not sufficient to sustain this large network.

Here is food for thought for those supporting this and other similar journalistic enterprises around the world: the most groundbreaking and most important media investigative output often is simply not sustainable.

It is difficult to imagine a Coca Cola advert popping up whilst reading an on-line investigative piece about the unwanted children of rape victims during the Bosnian war. Similarly, it is just as difficult to evaluate the impact upon the spirit of reconciliation in the region created by a documentary, produced by Serbian journalist, which names Serbian officers who ordered attacks on Kosovo Albanian villages in 1999.

So, congratulations BIRN! A decade later you are maturing and growing. Some new talents are taking over, to the delight of the old guard. I am proud I once was part of you.

Dragana Nikolic Solomon is a co-founder of BIRN and the former director of BIRN Serbia. Any views or opinions presented in this text are solely those of the author and do not necessarily represent any organisation.