Hasan Pristina University honoured former special envoys Christopher Hill and Wolfgang Petritsch on Wednesday with the title of Doctor Honoris Causa in a ceremony held at the faculty of philology. They were awarded the title for their contribution to the resolution of the Kosovo conflict. 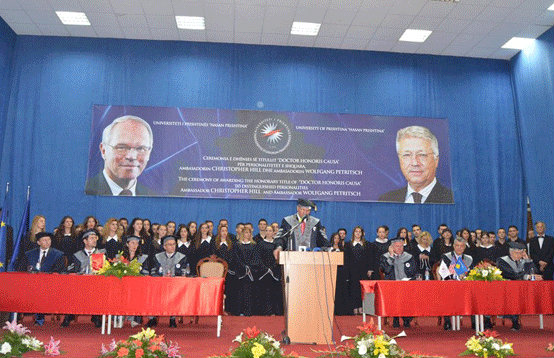 Hill and Petritsch, who worked as the special envoys of the United States and the European Union respectively during attempts to stop the Kosovo conflict in the late 1990s, were honoured for their outstanding contributions to creating conditions for peace, justice, freedom and democracy and increasing opportunities for the development of education, science and academic freedoms in Kosovo.

“We were lucky to have you and your peoples as our friends during our worst, hardest time,” said Gashi.

“Mr. Hill and Mr. Petritsch stood by Kosovo when Kosovo needed friends the most,” said Thaçi.

“Kosovo has changed a lot since the time when I was here. You cannot choose your neighbours, but you can live in peace with them,” said Hill.

“The European Union is facing many problems, but Kosovo is moving towards the EU,” said Petritsch.

Petritsch and Hill acted as mediators during the talks between Kosovo Albanians and the Yugoslav authorities at the Rambouillet Conference in 1999 before the NATO bombing campaign ended the conflict.

Petritsch, from Austria, is also a member of BIRN’s Regional Board.