A five-member delegation from the US State Department has visited BIRN BiH, where the delegation was briefed about war-crimes reporting and trials conducted before the State Court. 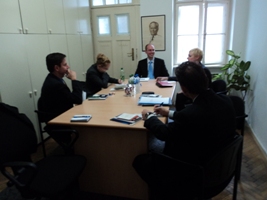 Members of the delegation expressed interest in BIRN’s past work reporting on war crimes, and asked about the influence and interest of the public in these cases.

Anisa Suceska-Vekic presented the members of the delegation with an overview of projects initiated by BIRN over the past five years, including Justice Report, Justice Radio and Justice TV. She also spoke about the training sessions on court reporting, organized by BIRN, for journalists from different towns in Bosnia and Herzegovina.

Merima Husejnovic explained the importance of reporting on war crimes and described practical experiences in reporting on trials conducted before the War Crimes Chamber of the Court of Bosnia and Herzegovina and problems that BIRN journalists face in their work.

The State Department Delegation expressed its wholehearted support for the work being done by BIRN, and stressed the importance of this work.