Representatives of the Delegation of the European Union’s delegation to Serbia, the Serbian government office and EU’s PROGRESS European Partnership with Municipalities Programme sent out a message to mayors and heads of municipalities in south and south-west Serbia, saying that the amount of donations they will get in the coming period depends on their abilities and competence, which is why it is necessary to strengthen the capacities of the local administrations so they can respond to the challenges of EU integration in the best possible way. 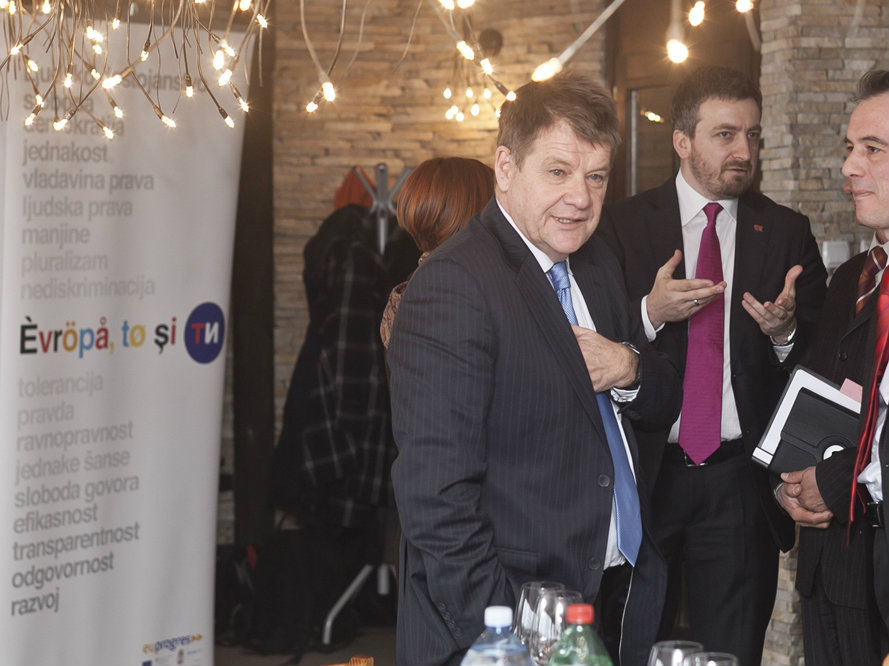 A working lunch took place on March 22 in Topola in Serbia to mark the beginning of the ‘Europe – That Is You’ campaign. In attendance were mayors and heads of 25 cities and municipalities in south and south-west Serbia, from the Pcinja, Jablanica, Toplica, Zlatibor and Raska districts, and they all voiced their readiness to support the activities aimed at bringing Europe closer to the local communities that they represent.

The deputy head of the EU delegation to Serbia Adriano Martins confirmed the European Union’s resolve to give Serbia strong support on its path towards European integration and said that the coming period will be marked by an even more intense cooperation on initiatives coming from underdeveloped or insufficiently developed regions.

“EU funds are open to all projects whose foundation is the development of your communities, inter-municipal cooperation or the strengthening of cross-border initiatives. We will be together on this job and all EU institutions that have their representatives in Serbia will stand at your disposal. However, you are the bearers of these projects and initiatives,” said Martins.

EU PROGRESS manager Graeme Tyndall commented on the results jointly achieved by his team and the local administrations by implementing dozens of projects and stressed that south and south-west Serbia have the capacity to respond to the challenges that the next phase of EU integration will bring.

“If over the past three years we have helped you get some important things started in your local communities then our mission has been fulfilled. However, what is crucial is the depoliticisation of development. The important thing is not that the local president launched a project but for that project to be in the benefit of all members of a community and for it to be successfully completed,” said Tyndall.

European Integration Office director Milan Pajevic spoke about the importance of cooperation between local government units and state institutions. He explained his institution’s role in the system of allocating donor assistance and voiced readiness to assist, with his team, local administrations in improving ways of accessing European funds.

“It is important that we understand each other well and that we know what our goals are. I believe that this campaign will help us get there. The European Union’s support is already noticeable in local communities and we will make efforts to ensure that this also continues to be the case in the coming period,” said Pajevic.

Representatives of the cities and municipalities spoke during the working lunch and had many comments on the cooperation established so far with the EU, the EU Integration Office and the EU PROGRESS Program.

The overall conclusion was that the projects funded by the European Union, the Swiss government and the Republic of Serbia through the programme have produced results which have given the people in local communities a new energy, improved their living conditions and equipped the local administration with new strength to work even more decisively on developing these cities and municipalities.

„You helped us obtain funds so we could improve our people’s quality of life and, by doing so, you made our work easier,” said Jovan Corbic, the president of the Municipality of Raska.

“It is our job to set up a good team, a team skilled in producing developmental projects. Only then can we say that we have been successful in our work,” added Semsudin Kucevic, the head of the Municipality of Tutin.