Sorana Stanescu, a journalist from Romania, takes first place in the 2012 Balkan Fellowship for Journalistic Excellence for her story about the job restrictions that have left migrant construction workers underpaid and vulnerable to exploitation. 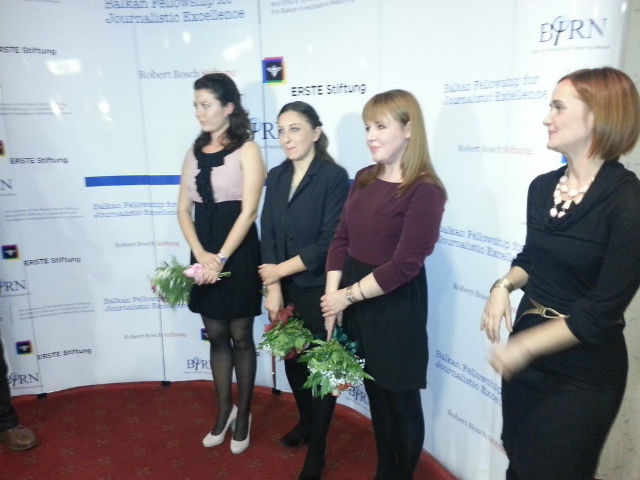 The top prize in this year’s Balkan Fellowship for Journalistic Excellence has been won by Sorana Stanescu for her article, Cheap and Far from Free: The Migrants Building Britain.

Stanescu, a reporter for the Romanian public broadcaster, won 4,000 euros in prize money.

Second place and a 3,000-euro award went to Saska Cvetkovska from Macedonia for her article, Want to Work? Join the Party: Contacts Trump Merit in Balkan Job Market.

The winning articles were selected by an independent panel of judges, including Florian Bieber, a professor and director of the Centre for Southeast Studies at the University of Graz; Remzi Lami, the executive director of the Albanian Media Institute, Milorad Ivanovic, executive editor of the Serbian weekly, Novi Magazin; Markus Spielman, editor of the Swiss newspaper, Neue Zeitung Zuricher; and Adelheid Wölfl, Zagreb correspondent for the Austrian daily, Der Standard.

All members of the committee stressed that it had been “extremely difficult” to choose the three winners. They noted that the winning article covered a highly relevant and complex topic, demonstrating great mastery of detail.

Stanescu said she was grateful that the fellowship had allowed her to carry out an in-depth investigation on a subject that she had been researching for a long time.

“The best part of the programme was the opportunity to work with a very scrupulous editor, an experience you rarely get in Romania, and one that can only enhance one’s storytelling,” she said.

The winners were announced on the evening of Friday, 23 November, at a ceremony at the Holiday Inn Hotel in Skopje. Besides fellows and jury members, a further 30 journalists from the region who are alumni of the fellowship also participated in the event.

The theme for this year’s competition was “communities”. Journalists on the programme reported on topics ranging from football fan groups, the environmental movement, radical Islamists, youth unemployment, orphans and the exploitation of immigrant workers within the European Union.

Additionally, the programme encourages regional networking among journalists and provides balanced coverage of complex reform issues that are central to the region and the European Union.

This year’s ten fellows were selected from more than 120 applicants from nine Balkan countries. Next year’s programme will be open for applications from early 2013.