Appearing on “Life in the Municipality,” opposition and civil society members accused Viti Mayor Nexhmedin Arifi, a member of the PDK, of blocking economic development and favoring party supporters and family members during his mandate. 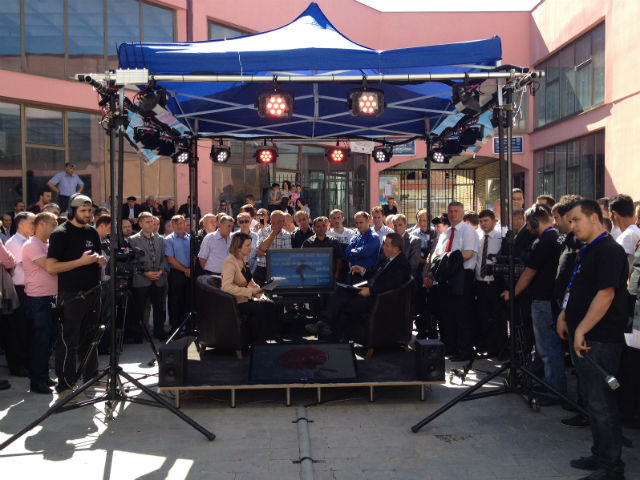 Monitors from BIRN and the GAP Institute have found that some tenders have indeed been won by party supporters and family members. Among others, a contract for supplying water and food to kindergartens and the tender for an ambulance, valued at 35,000 euros, were won by the company Shpetimi, whose owners include municipal advisor Besim Halimi, a member of the PDK.

Automobile insurance is provided by Siguria, which is owned by the deputy head of the municipality. According to Mayor Arifi, the company was chosen because it “offered the lowest prices in the tender.” Meanwhile, the company that supplies fuel for municipal cars, IziPetro, has a representative who is the brother of the municipal director of agriculture.  Arifi said that the contract was signed before the director got his job. “He does not hold this contract anymore.”

During the debate, Arifi boasted that he had built a cemetery for veterans just outside of the municipality of Viti and had overseen construction of the city’s square, parking spaces and road signals. He also touted the completion of a municipal legal structure.

“Together with the opposition we managed to create the commission on a municipal level and by complying with all procedures, the status of the municipality was approved,” he said.

But Hasan Alia from the opposition party LDK said the legal initiative came from his party. Alia also criticised the mayor’s administration. “The administration cannot be considered efficient when it has four or five directors on its board who are working for the first time; it is not an efficient administration when the mayor continually pursues his own interest,” he said.

Vetevendosje members criticized all the parties that are part of the municipal assembly for violating legal provisions. Arton Muslia said that the opposition cannot be freed from responsibility since it has been part of the decisions.

“For two years in a row the (municipal) status hasn’t been approved and the mayor is not the only one responsible for this,” said Muslia, adding: “the opposition does not exist in Viti”.

He proceeded with accusations of budget mismanagement, mentioning that 208,000 euros were expended for maintaining roads; 10,000 euros for paint; 60,000 for the tender to build the dam for irrigation, and others. Apart from expenditures, according to him, the results of these projects are nowhere to be seen.

“The political scene of Viti is depoliticized. In general, politics here is reduced to salaries, per diems, and services, whereas the residents are not able to enjoy the goods that they should have,” Muslia said.

Of the electoral promises of 2009, few have been implemented in practice. Among others, the construction of the bridge at Viti’s outskirts started two years ago, but it hasn’t been completed. The municipality says that works have been suspended because of the objections of one resident.

In addition, the lack of a municipal building has caused the municipal administration to continue to work in seven different facilities.