The 2012 fellowship has got underway with a seminar in Vienna, where the reporters worked with a team of editors to fine-tune their proposals. 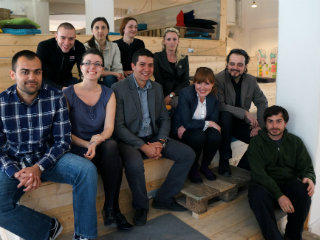 In the introductory session on April 26, the journalists discussed their ideas and the challenges they faced in their work. The afternoon was spent in a discussion about reporting techniques, conducted by Neil Arun, the fellowship’s international editor, and Gordana Igric, the editor-in-chief of the Balkan Investigative Reporting Network (BIRN).

The second day was taken up by a series of 90-minute meetings in which the reporters took turns to hone their story ideas with a team of editors from BIRN. Those who were not involved in the sessions spent the morning at the offices of Der Standard, receiving an insight into the editorial processes that shape the leading Austrian newspaper.

During the afternoon seminar, BIRN local editors revealed their techniques for avoiding the common pitfalls for investigative journalists in the region. Davor Konjikusic, a fellowship alumnus, also gave the reporters his tips for taking strong pictures to accompany their stories.

On the third and final day, further one-on-one editorial sessions were held for the reporters. The rest of the team spent the morning on the streets of Vienna, testing out some newly acquired photography skills.

In the afternoon, Romanian investigative journalist and fellowship alumnus Adrian Mogos spoke to the reporters about the risks of going undercover. Lawrence Marzouk, BIRN’s Kosovo editor, also shared his insights into gathering sensitive material from documents and public records.

At a concluding meeting that evening, the reporters discussed how they would tackle their stories in light of what they had learnt in Vienna.