On January 16th, 2017, a debate was organized in North Mitrovica at the EU Information and Cultural Centre, which gathered 30 participants including journalists, editors, and media experts. The participants represented different parts of Kosovo, including the capital Prishtina, other municipalities, Mitrovica North and South, and other Serb-majority municipalities. 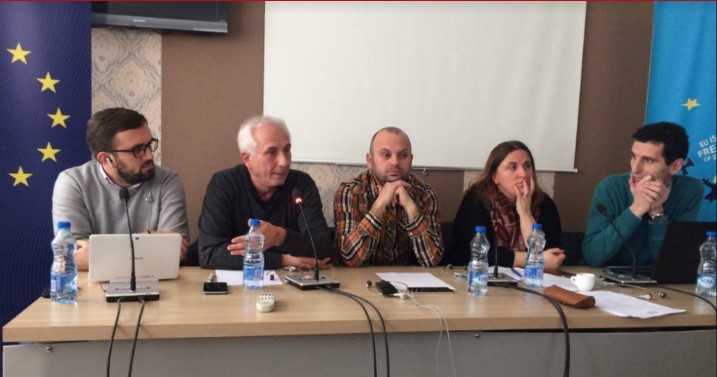 Following the objectives of the “Strengthening multi-ethnic dialogue among journalists in Kosovo” project—whose main goal was to strengthen the collaboration between Kosovo journalists from a variety of backgrounds—several activities were organized in order to identify the needs and come up with solutions, including this debate.

The discussion “Enhancing inter-ethnic dialogue and collaboration between journalists in Kosovo” was headed to tackle issues that participants found necessary to find solutions for. It would further lead to enhancing cooperation and understanding between Serb and Albanian communities in Kosovo, so that any responsible association would better represent the voice of all journalism groups in Kosovo, regardless of background. The debate thoroughly included talks on improving the cooperation between journalists so that any activity to take place in the future would receive equal contribution from all sides.

This activity was part of a collaborative project between BIRN Kosovo, the Association of Journalists of Kosovo, the Press Council and Mreza TV, a Serbian language media outlet in Kosovo. Representatives from these partners were also invited to the debate, along with representatives from EUSR, the Kosovo Media Commission, and so forth.

This debate brought positive results to the objectives of the project, as it helped identify future proposed activities to be implemented, and led to close cooperation between Kosovo Albanian and Kosovo Serb communities. Despite the identification of issues that could hinder the implementation of the project, such as language barriers and permission of journalists from their superiors to take part in certain endeavors, the activities revealed that there is a strong willingness from journalists from both sides to socialize and exchange ideas for a good cause.