BIRN’s new documentary, which investigates the Serbian commanders responsible for some of the worst attacks of the Kosovo war, was screened for the first time in Pristina. 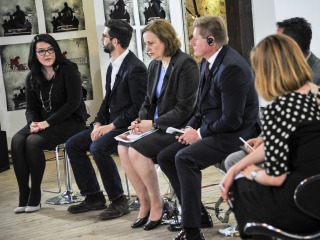 The new documentary, The Unidentified, which names the Serbian officers who ordered attacks on Kosovo villages around the town of Pec/Peja in 1999 and those involved in the cover-up operation to hide the victims’ bodies, was screened for the first time in Kosovo on Thursday evening at the Architecture Faculty in Pristina.

Marija Ristic, the director of the documentary, which was the result of a two-year investigation, told the Pristina audience that the hardest moments during the making of the documentary were when she was trying to secure interviews with Serbian police officers.

“They started to inform each other. They were trying to prevent other people from speaking out. At one point, we were afraid that we would not manage to prove anything because we could not get police officers to speak about this,” Ristic said.

Kosovo’s Ombudsman, Sami Kurteshi, said he was touched by the story in the documentary, in which both victims and perpetrators are interviewed, but said that for him, it was just one small part of the war.

Kurteshi said that despite the fact that there is little political will to tackle war crimes, such efforts should continue.

“The strengthening of justice is very important. Justice should not be dependent on political will,” he said.

Chief prosecutor at Kosovo’s Special Prosecution, Sevdije Morina, praised the documentary for getting both victims and perpetrators to talk about the crimes.

Morina also said that the Kosovo’s prosecutors are ready to take over war crime cases after the mandate of the EU rule-of-law mission, EULEX, was changed.

“Local prosecutors will soon take over the big cases, like the big massacre at Meja, from the EULEX prosecutor that was responsible until now for the war crimes [cases],” said Morina.

‘The Unidentified’ takes viewers back to 1999, to the villages of Ljubenic, Cuska, Pavljan and Zahac near Pec/Peja in Kosovo, where Serbian fighters killed more than 118 Albanian civilians. Their bodies were either burned or removed, and some of them were later found in mass graves at the Batajnica police training centre near Belgrade in 2001.

The trial of 11 fighters alleged to have been involved in the killings – 10 of them accused of being direct perpetrators – is still ongoing in Belgrade, but the police and army generals who gave the orders have never been prosecuted in Serbia.