Regional Conference on “Transparency of Courts and Responsibility of the Media” begins in Sarajevo. 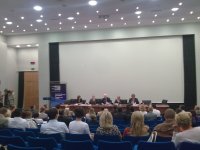 A Regional Conference on “Transparency of Courts and Responsibility of the Media” has started in Sarajevo. The Conference is being organized by the Balkans Investigative Reporting Network, BIRN, – Office in Bosnia and Herzegovina. During the three-day event, from September 1 to September 3, 2009, participants will explore ways of bridging the gap between judicial institutions, local authorities
and the media in the Western Balkans region.

“Our intention is to open a dialogue on the importance of responsible, timely and objective information sharing on war-crimes trials and the need for transparency of the judicial institutions before which these trials are conducted. Both things are important for regaining the trust of the public in the region for the judicial system and enabling people who have been victims of the gravest violations of human rights to start believing in justice,” Nidzara Ahmetasevic, BIRN – Justice Report Editor, said in her introductory speech.

On the first day of the Conference representatives of judicial institutions from the region discussed their experiences in long-standing work with the media, as well as their future plans for increasing transparency.

The first official from the judiciary to address the Conference was John Hocking of the Registrar’s Office with the International Criminal Tribunal for the former Yugoslavia, ICTY, who reminded participants that the transparency of the ICTY’s work has been a significant part of its legacy, adding that the Tribunal has for years sought to explain its work to “the community which it serves”.

Meddzida Kreso, President of the Court of Bosnia and Herzegovina, said that from the beginning of its work the Court has been aware of the role of the media and the influence it has on public opinion, adding that the Court therefore decided to “open its courtrooms” immediately. She stated that the media had made “good progress” in terms of war-crimes reporting.

“We must secure good work conditions for the media. We find it important for Bosnian citizens to know what is happening in the State Court’s courtrooms. Our citizens have the right to know the truth. We respect their right. Our trials are public and the media are welcome to be there,” Kreso said, also recommending that other courts in the country “start opening their courtrooms” to the public.

Chief State Prosecutor Milorad Barasin was among the speakers. He reminded Conference participants that it is very important for “the victims to see justice being implemented in practice”. Sinisa Vazic, President of the War Crimes Council of Serbia, stated that the interests of the public and the protection of the criminal proceedings had to be taken into consideration when reporting from courtrooms.

“The relation between the judiciary and the media is an issue that is often put aside. This particularly refers to the influence of the media. The media have multiple roles, starting from the positive role of protecting and communicating information, to a potentially negative role of abusing the judiciary for reasons of media interest or in the interest of powerful groups,” said Branko Hrvatin, President of the Supreme Court of Croatia.

On the second day of the Conference, September 2, editors from media outlets in Bosnia and Herzegovina and the region, representatives of non-governmental organizations and spokespersons of judicial institutions will discuss the responsibility and reliability of the media in court reporting and the importance of war-crimes reporting. Round table on media freedoms was held with Viktor Ivancic from Croatia, Petar Lukovic from Serbia, Vildana Selimbegovic from Bosnia and Herzegovina and Ana Petruseva, BIRN regional editor from Macedonia.