In its 11th year, the Balkan Investigative Reporting Network Bosnia and Herzegovina (BIRN BiH) began reporting on corruption, organised crime and terrorism, while maintaining a leading role in monitoring war crimes and the judiciary. 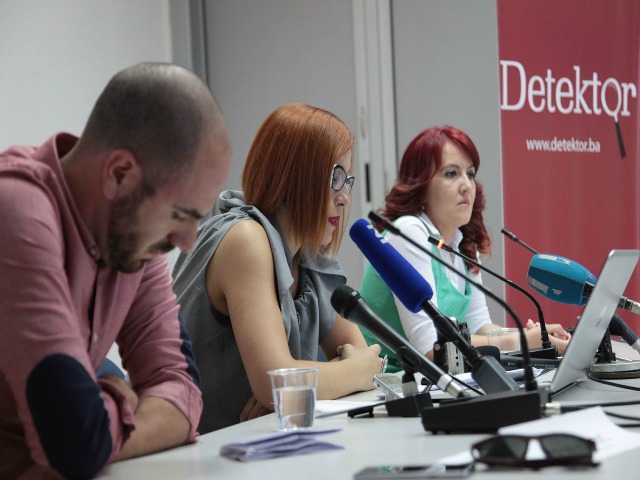 Over the past year, BIRN BiH has published a total of 2,258 news articles, reports and analysis pieces, and achieved a record number of republications in other media – more than 12,500.

BIRN BiH used the same methodology it has already used for years when reporting on war crimes, so as well as reports from courtrooms, we have also done analysis and research in order to point out the challenges facing law enforcement agencies and judicial bodies.

More than 320 articles covering these subjects were published. At the beginning of June this year, we also organised a conference at which analyses of the situation in the field of terrorism, organised crime and corruption were presented.

Through its work, BIRN BiH showed that institutions dealing with organised crime cases at the state level faced a problem related to the confiscation of illegally-acquired assets and that the Prosecution of Bosnia and Herzegovina targets minor corruption cases.

We published a number of analysis articles and several pieces of research in which we pointed to violations of the law on public procurement in institutions in Bosnia and Herzegovina, violations of regulatory plans when building Arab-funded hotels, as well as problems related to illegal weapons and child trafficking.

Srdjan Blagovcanin of watchdog organisation Transparency International said BIRN BiH has pointed out some pressing problems in society during the past year.

“BIRN is an excellent example of how professional and responsible journalism can play an important role in society in terms of raising and addressing key social issues and, by doing it, making the first step towards resolving those issues,” Blagovcanin said.

A regional conference on terrorism was organised in Sarajevo in the spring, where figures were presented detailing the number of people from Yugoslav countries fighting in the Middle East, as well as information about the challenges facing these countries in fighting radical extremism.

During the past year, BIRN BiH continued monitoring all war crime trials held before the Bosnian state court. As many as 1,037 articles from its courtrooms were published.

A total of 72 analysis articles were published, including 17 analyses of war crime cases completed before the Court of Bosnia and Herzegovina.

Besides the analysis of specific cases, we wrote about problems facing women who had been raped and can never become mothers, the destruction of war crime files in Prijedor, as well as problems facing lawyers, witnesses and defendants who admit their guilt in war-crime cases.

A regional conference on cooperation in war-crime cases, as well as a training session for a group of journalists on reporting from courtrooms and covering transitional justice issues, was held in the autumn.

Reporting on war crimes cases and on corruption cases at entity courts also continued. A total of 334 articles was published.

Tarik Crnkic, a prosecutor with the District Prosecution in Eastern Sarajevo, said that BIRN BiH reported from trials in a professional manner.

“I think BIRN BiH’s reporting is objective and based on legal standards, which enables the general public to be informed about the work on those cases,” Crnkic said.

Besides prosecutions of war crimes in Bosnia and Herzegovina, we continued reporting on trials at the Hague Tribunal, with more than 100 articles published.

The first-instance verdict in the trial of former Republika Srpska President Radovan Karadzic, as well as an interview he gave to BIRN BiH just beforehand, generated the most attention.

Under the first-instance verdict, Karadzic was sentenced to 40 years in prison for committing genocide and other crimes in Bosnia and Herzegovina. His interview was republished by more than 100 international, regional and local media.

Over the past year, BIRN BiH followed disciplinary proceedings against judges and prosecutors, as well as sessions of the High Judicial and Prosecutorial Council.

We pointed to deficiencies in the system of evaluation of judges and prosecutors, which discourages them from working on complex cases. We also wrote about the suspension of chief prosecutor Goran Salihovic and the selection of a new president of the state court.

In the middle of the year, BIRN BiH launched its new web page: detektor.ba, which offers far more advanced search options than the old domain.

In the 12 episodes of BIRN BiH’s ‘TV Justice’ magazine programme, which were broadcast by around 20 TV stations in Bosnia and Herzegovina and via satellite, our viewers could watch footage on the disciplinary proceedings against judges and prosecutors, the origins of the Sarajevo Film Festival during the war, women in uniform, Roma at war and in peace, as well as the first TV show in the country dedicated to terrorism.

“The topics BIRN covers, such as war crimes, terrorism, are so sensitive, so the professionalism BIRN brings into these stories is so helpful for our audiences”, Habibovic said.

Over the past year, BIRN BiH has cooperated with the following donors: the Norwegian Ministry of Foreign Affairs, the Swiss Feeral Department of Foreign Affairs, the National Endowment for Democracy (NED), the Swedish International Development Cooperation Agency (SIDA), the US Embassy in Sarajevo, Peace Nexus, the Dutch MATRA programme, as well as the Robert Bosch Stiftung via BIRN Hub.