Ten fellows from the region met in Skopje for the final seminar of the Balkan Fellowship for Journalistic Excellence. 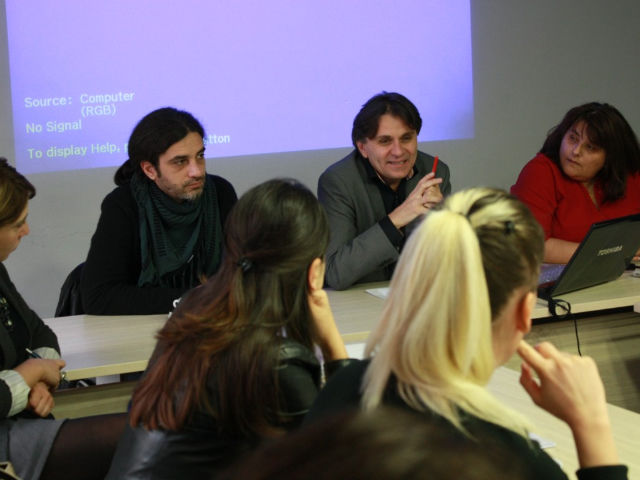 Following the opening dinner on Wednesday night, on Thursday the agenda included a panel on social networking and the media with Filip Stojanovski, program coordinator at the Metamorphosis Foundation for internet and society.

Stojanovski gave the fellows valuable insight as well as practical tips into how journalists can use social networks to promote their work, but also how they can gather information and double check on facts. The fellows exchanged views and examples of journalists’ use of social networks throughout the region.

The second panel on the state of media in Macedonia included Goran Mihajlovski, editor-in-chief of Vest daily, Tamara Causidis, president of the Journalists’ union and Petrit Saracini of the Macedonian Media Institute. The panelists discussed the deteriorating state of the media and of journalistic standards in the country, and other challenges that journalists face.

The panelists and the fellows discussed issues of media freedom, the media’s struggle to survive in the market and alternative ways for the media to survive and resist pressures coming from political or business interests.

On Thursday the fellows had a guided tour in the centre of Skopje and visited all the new building and monuments erected as part of the Skopje 2014 project, a government project to revamp the city.

The Balkan Fellowship for Journalistic Excellence, funded by the Robert Bosch Stiftung and the ERSTE Foundation, in cooperation with the Balkan Investigative Reporting Network, BIRN, has been running since 2007.  Each year, ten Balkan journalists are competitively chosen to receive funding and professional support to conduct their own research projects.

Selected journalists receive a fellowship of 2,000 euro, a travel allowance of up to 2,000 euro and a chance to participate in a seven-month programme for professional advancement. In addition, the independent Selection Committee awards bursaries of €4,000, €3,000 and €1,000 to the authors of the three winning articles.

This years award ceremony will take place on November 23 in Skopje.