BIRN was featured in Al Jazeera English’s weekly ‘Listening Post’ media programme as part of a report on alleged censorship in Serbia. 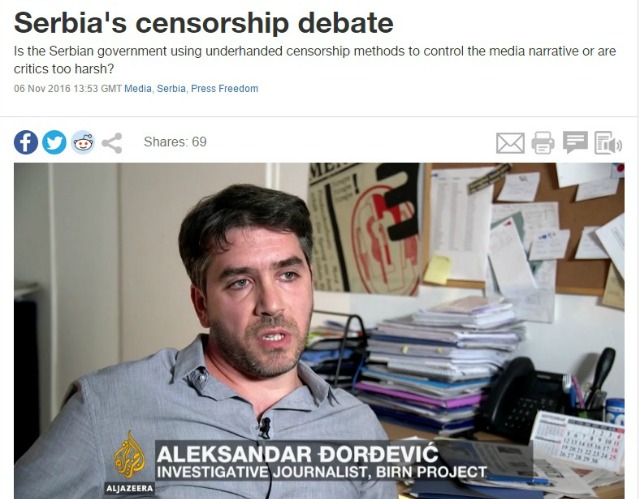 The report deal with alleged media censorship and government control of the press in Serbia, as well as the financial and professional challenges that newsrooms and journalists in the country face.

Djordjevic spoke about an exhibition that the ruling Progressive Party organised last summer to promote its case that there is no censorship in Serbia because critical media a free to ‘lie’.

“The problem with the current ruling party and its allies is that they do not understand a basic premise – not all negative reports or criticism about those in power should be considered a lie,” Djordevic told Al Jazeera.

“The name of the exhibition, ‘Uncensored Lies’, shows how those in power do not understand the clear difference between lies and criticism,” he added.

Among the news reports on display at the ‘Uncensored Lies’ exhibition was an investigative story written by Djordjevic.

“The story revealed irregularities in the awarding of a state tender which possibly cost taxpayers 120 million euros. The EU deemed the story to be award-winning investigative journalism. Serbia’s Interior Minister put it another way: He said that he could not believe that the EU would fund news outlet that lies,” Al Jazeera reported.

However, EU foreign affairs spokeswoman Maja Kocijancic told the programme that the Brussels has no political agenda when awarding grants to media.

“The rules under which we support the independent media are extremely clear – we do not intervene into editorial policy in any way which in turn means that the views presented by those that win the grants are theirs only,” Kocijancic said.

Read more about the campaign against BIRN led by the Serbian government and pro-government media on our page BIRN under Fire.