Tim Judah is a front line reporter for The Economist and an author. 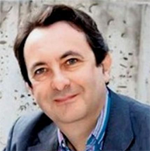 He worked for the BBC before becoming the Balkans correspondent for The Times and The Economist. During the Kosovo war he broadcast widely and wrote for the New York Review of Books, The Observer, The Sunday Telegraph and The Guardian Weekend magazine. Judah is also the author of the prizewinning book
The Serbs: History, Myth and the Destruction of Yugoslavia, published in 1997 by Yale University Press.

Judah is a graduate of the London School of Economics and of the Fletcher School of Law and Diplomacy at Tufts University.