Jeta Xharra is a renowned journalist in Kosovo and Balkans, hosting the award-winning current-affairs TV programme, Life in Kosovo. 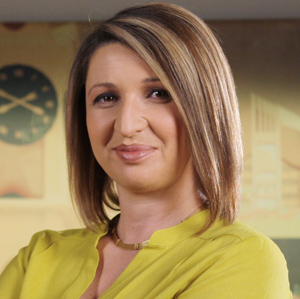 Since 2005, Xharra is the Country Director of BIRN office in Kosovo and the editor-in-chief of Kosovo’s most-watched current affairs TV programme, Life in Kosovo.

Xharra got into journalism working as a fixer/local producer for BBC News and Channel 4 in 1998 and later became the Manager of the BBC Kosovo Bureau. In 1999 Jeta worked for BBC News in Albania and Macedonia.

She graduated with an MA in War Studies from King’s College London (2000) and an MA with Distinction in Screenwriting from the London College of Printing (2002).

She has published a front-page article in ‘The Independent’ and other texts in The Economist, Sunday Telegraph and Jane’s Intelligence Review. While in the UK, Xharra worked for the Foreign News Planning Desk at the BBC World Service.

In 2003 Xharra became the project director for IWPR Kosovo office, where she made most impact with vigilant and challenging moderation of popular current affairs programmes broadcast on the main Kosovo TV channels, RTK and KTV. Under Xharra’s supervision, Kosovo was the first office in the IWPR

Balkan project to develop a three-month journalism training programme, which attracted over 200 people for 20 places.

‘Warless’, a play that Xharra wrote in English, was chosen as one of the 10 best plays among 550 that competed in the Young Writers Festival in Royal Court Theatre in London where it had a public reading on December 10 2004.