Following a regional conference at which a regional report on the relationship between media and rule of law institutions on fighting corruption and organised crime was launched, BIRN Kosovo held a roundtable event to discuss the topic at the local level. 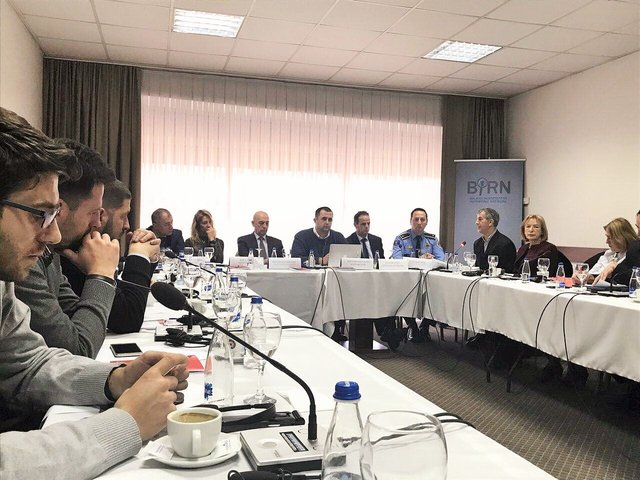 The roundtable, which took place on January 30, was organised as part of a mutual project with BIRN Bosnia and Herzegovina and BIRN Serbia called “Exercising Freedom of Expression and Openness of State Institutions in Bosnia & Herzegovina, Kosovo and Serbia”, an endeavor supported by the German Foreign Office Stability Pact.

The panel consisted of seven people: Kreshnik Gashi, a BIRN editor who also moderated the discussion; Arben Qirezi, the author of the Kosovo report; Enver Peci, the head of the Kosovo Supreme Court; Ewa Korpi, EULEX prosecutor; Besim Kelmendi, prosecutor at the Kosovo State Prosecution; Baki Kelani, spokesperson from the Kosovo Police; and Petrit Çollaku from the Kosovo Association of Journalists.

The panel discussed this central question: Who sets the agenda on reporting organised crime and corruption?

State prosecutor Besim Kelmendi said that cases of organised crime and corruption “are not easy to investigate”, and that the biggest difficulties are with high-level corruption cases.

“We have prosecutors that are more open and some that hesitate to communicate with media, and I can say that prosecutors should not hesitate to talk to media within the legal framework”, Kelmendi said.

EULEX prosecutor Ewa Korpi talked about the presence of fake news in reporting on organised crime and corruption.

“During this year’s local elections, I had several cases when it was reported that a certain investigation was over while I had that case on my table, investigating it. And this for sure comes from political pressure, and I have to say that in the place where I come from, Sweden, I have never seen such a case”, Korpi said.

After the report was presented, participants were given the opportunity to pose questions to the panel and engage in an interactive discussion. Representatives from media organizations and NGOs in Kosovo were pleased to have a chance to address questions on access to public documents to representatives of the panel and the judiciary.

Through this report, BIRN Kosovo aims to foster freedom of expression and transparency in relevant institutions in Kosovo and to contribute to the debate among journalists, civil society and public officials of judicial institutions on the elimination of barriers to reporting on organised crime and corruption.