Charges were filed a couple of years after BIRN Macedonia published an investigation, ‘Stains on the Government Cleaning Tender”, in August 2016, revealing a scheme in which a government tender worth over 10 million euros was rigged. 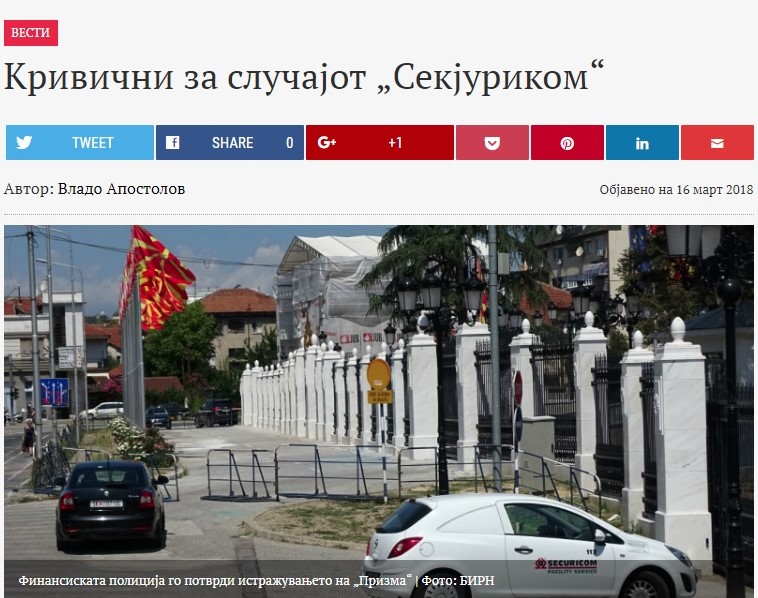 BIRN wrote that the head of the government’s procurement service, Vase Donevski, allowed a company called Securicom to create a fake tender competition through its affiliated companies. As a result, there was no real competition and the company won the tender. The Financial Police estimated that if other companies had been allowed to bid, the state would have paid about four million euros less for the cleaning service.

Macedonia’s prosecution filed charges for abuse of office against Donevski in 2018. His alleged accomplice was Austrian businessman Wolfgang Gamper, who owns Securicom, which was tasked with cleaning and securing the government building and the other ministries.

The Macedonian police issued an international arrest warrant for Gamper in September, after he fled Macedonia. Gamper alleged in an interview with BIRN in October that the new government led by the Social Democrats asked him for money in exchange for his freedom.

After BIRN published the interview with Gamper, BIRN’s journalist was called in by the prosecutor on the case to share information about Gamper’s accusations. BIRN declined to share the names Gamper provided and advised the prosecution to contact him.

After BIRN Serbia reported on ruling party officials working illegally at the Medical College in the town of Cuprija, one of them, Aleksandar Martinovic, reported his salary from the college to the Anti-Corruption Agency for the first time after BIRN’s article was published.

BIRN Serbia published the article ‘Cuprija: Political Employment at Medical College’ in October about officials from the Serbian ruling party who work at the college. 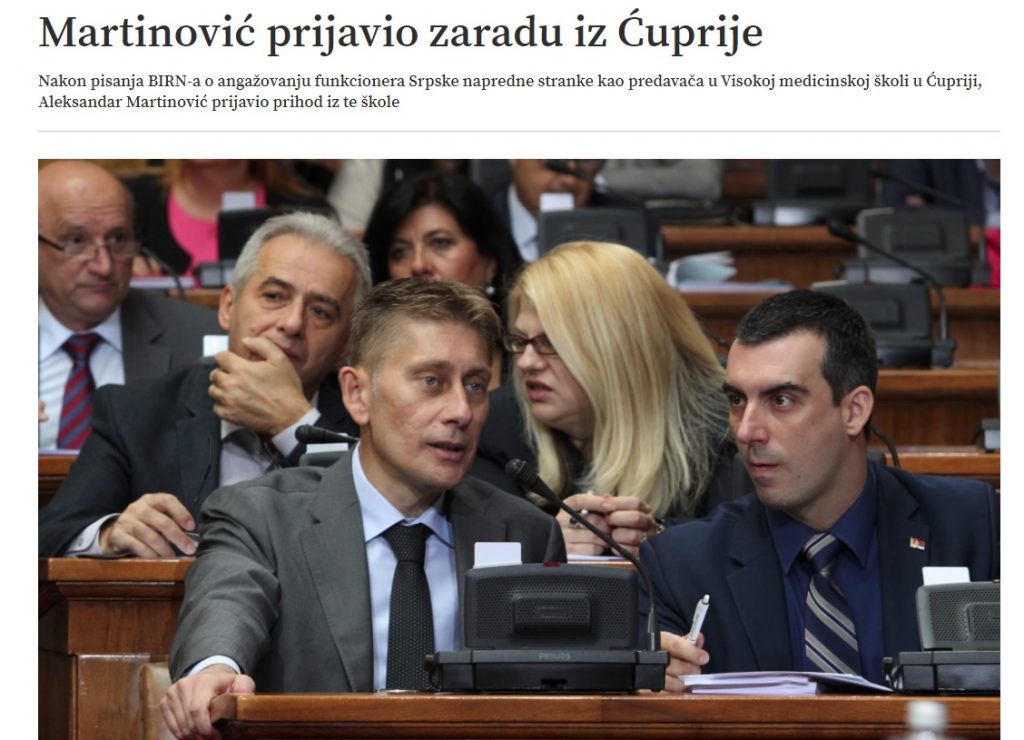 An inspection by the Ministry of Education found that all the contracts were illegal and that the college is obliged to terminate them due to the lack of proper documentation for their employment.

However, two of them – Aleksandar Martinovic and Darko Laketic – were still on the Medical College’s list of teaching staff for the new school year.

Martinovic, the head of Serbian Progressive Party’s parliamentary group, reported his salary as 60,000 dinars, with a start date of October 1, after BIRN’s report about him working at the college.

However, documents showed that Martinovic has been working there much longer.

Beside his salary from the college, Martinovic has five more salaries from the state budget – a total of 264,000 dinars per month.

After BIRN published the report, there was a discussion in parliament about it, on the initiative of an opposition MP.

An investigation published by BIRN in January 2017 made details public about an investigation of three Albanian judges, who had ruled in favour of a party in a civil lawsuit after receiving an all-expense paid trip to Madrid to watch a football match between Real Madrid and Barcelona. The story brought public attention to the corruption case and put pressure on the prosecutor’s office to send it to court. In February, the three judges were suspended from the office by the High Council of Justice. 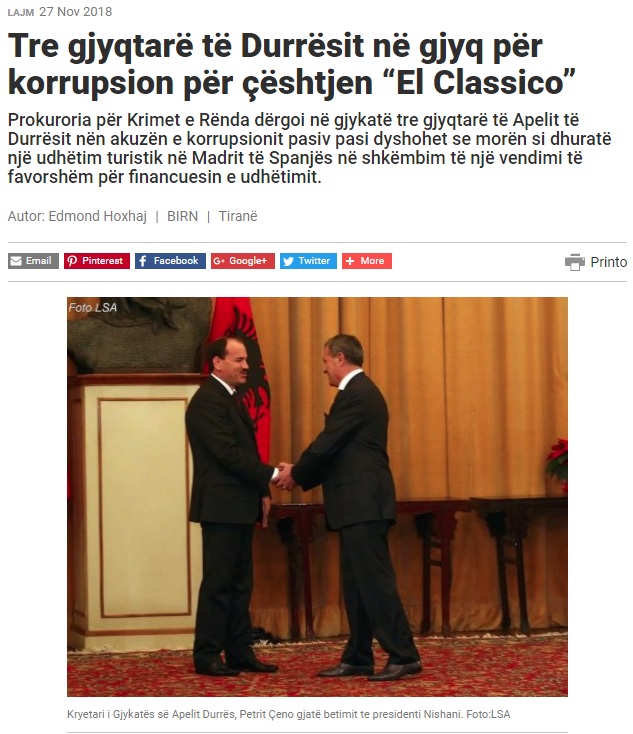 More about the case:

Facebook took down at least 14 pages identified in a BIRN and BBC collaboration as being linked to the Knights Templar International, a ‘Christian militant’ organisation active in the Balkans. 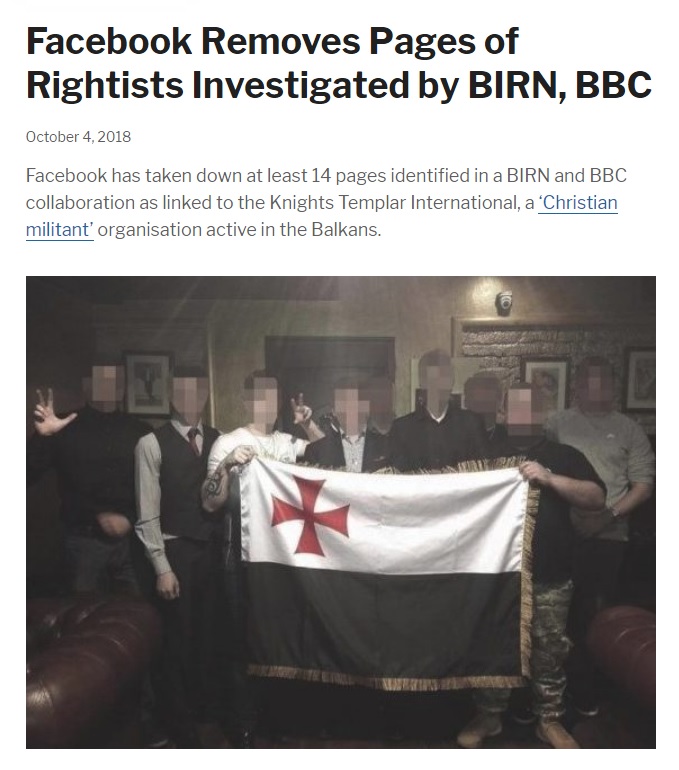 KTI – which calls itself “a living shield and sword for the defence of Christian communities and the upholding of Christian principles” – has boasted about how its vast network of social media pages helped to elect Donald Trump as US President and swing the UK referendum on leaving the European Union.

The organisation has attracted controversy for its hard-line views on Muslim immigration to Europe and donation of equipment to so-called “migrant hunters” in Bulgaria and to Kosovo Serbs preparing for confrontation with Kosovo’s mainly Muslim Albanian majority.

In May, BIRN and the BBC published the fruits of their collaboration into the British nationalists operating in the Balkans. BIRN’s investigation highlighted the links between British anti-immigration hardliner Jim Dowson and a web of patriotic sites, including the KTI, which are becoming increasingly active in Serbia.

The BBC produced television and radio documentaries focusing on Dowson, “the invisible man of Britain’s far right”, and his activities in Hungary, Bulgaria, Serbia and Kosovo.

The collaborations were part of BIRN’s Paper Trail to Better Governance programme, funded by the Austrian Development Agency.

In June, the British parliament’s committee on arms export controls requested internal correspondence related to the shipment of ammunition from Bosnia to Saudi Arabia, following BIRN’s investigation into the deal. 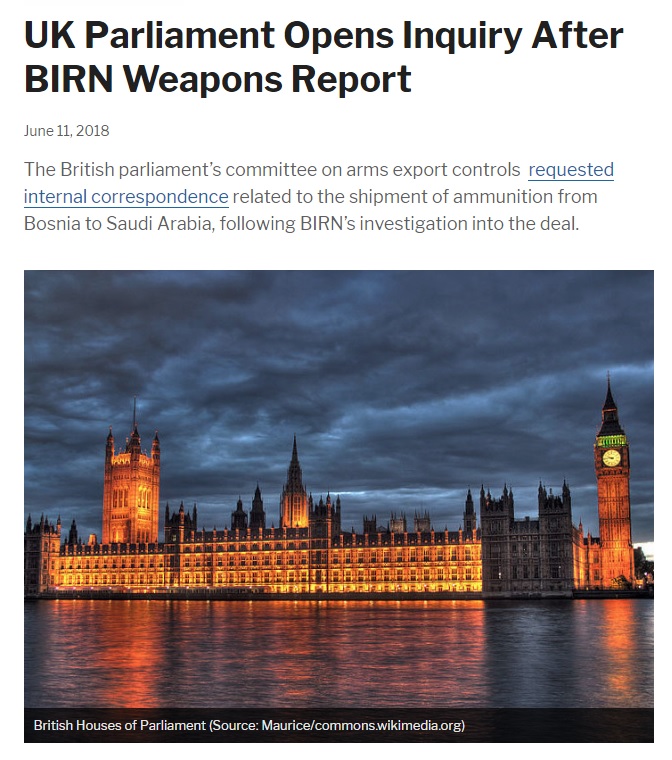 BIRN revealed that the UK failed to warn Bosnia and Herzegovina of its suspicions about the consignment of bullets officially bound for Saudi Arabia.

In September 2017, a BIRN investigation sparked an official probe in Germany into whether the Pentagon broke the law by sending weapons to Syrian rebels through its German airbases. A public prosecutor in the city of Kaiserslautern carried out a preliminary investigation into the findings of an investigation that BIRN, the OCCRP and Süddeutsche Zeitung published.

BIRN’s weapons investigations in 2016 provoked reactions from heads of states and foreign ministers in Serbia, Bulgaria and Montenegro, and from arms companies. The EU’s diplomatic service also said it was looking into the findings of the BIRN and OCCRP investigation into how Central and Eastern Europe weapons flooded the battlefields of Syria, while the opposition in Germany questioned Berlin’s role in the Middle East arms trade following the reports.

Fisnik Tolaj, the son of a former judge in Decan/Decani, was convicted in July of fraud, illegally exerting influence, forgery and the illegal possession and use of weapons after BIRN’s ‘Justice in Kosovo’ programme aired footage of him receiving a bribe in return for influencing court proceedings. 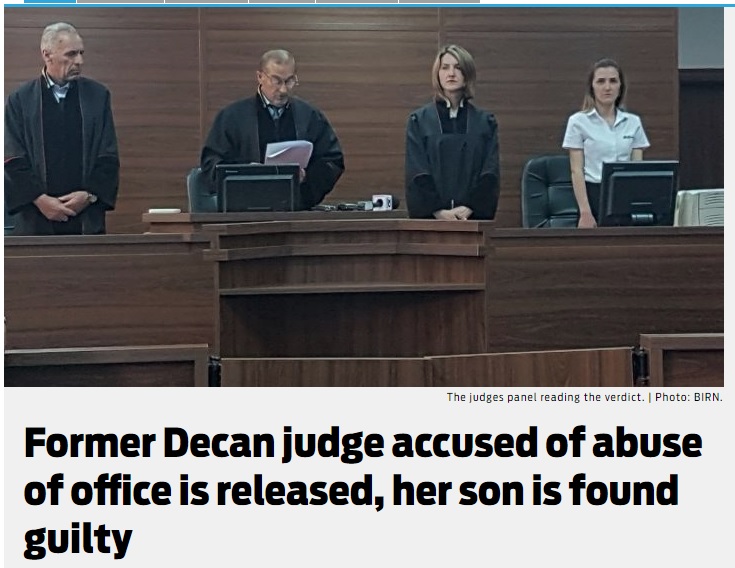 But the court ruled that the prosecutor failed to prove that his mother, former judge Safete Tolaj, who resigned her post in November 2017, had abused her office.

Judge Tolaj was indicted for abuse of office after ‘Justice in Kosovo’ aired the footage of her son.

Reporting on a visit by Ukrainian President Petro Poroshenko to Serbia in July Radio Free Europe’s Balkans service reported that the tensions between Belgrade and the Ukrainian ambassador in Serbia, which had diplomatic consequences, arose in November 2017 and that the trigger was ambassador Oleksandr Aleksandrovych’s interview with BIRN. 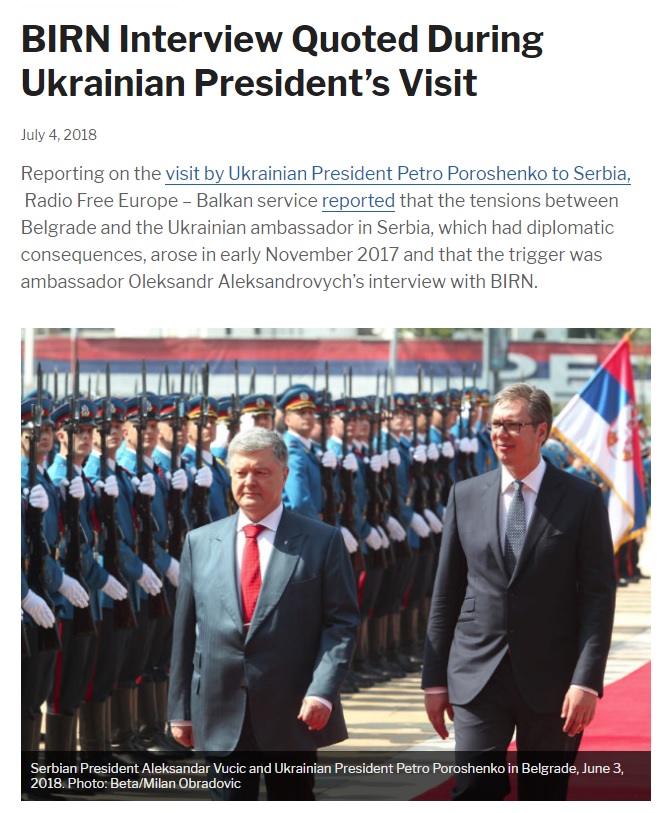 In the interview, Aleksandrovych said that “Putin does not care about Serbia”, claiming that Russia’s president is only using Serbia as “another instrument to destroy Europe”.

Aleksandrovych also stressed that  Serbia was not doing enough to stop its citizens from travelling to Ukraine to fight for pro-Russian forces in the conflict in the east.

The ambassador said that Russian propaganda and its secret services had played a huge role in attracting Serbian and other foreign mercenaries to Ukraine.

After BIRN interviewed the Ukrainian ambassador, tensions between Kiev and Belgrade rose.

A BIRN Albania investigation published in January highlighted the fact that despite court verdicts won by consumers, Albania’s Insurance Bureau had for more than a decade refused to pay damages to third parties involved in accidents or to family members of the victims of car accidents. Following the BIRN probe, the Financial Oversight Authority ordered insurance companies to pay over 14 million euros in unpaid compensation immediately or face sanctions. 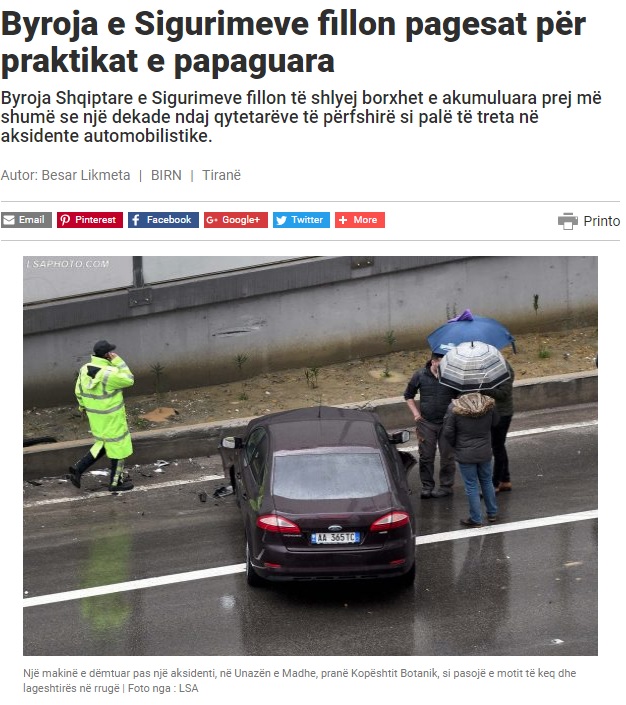